Review by Christopher Shultz February 25, 2016
In: 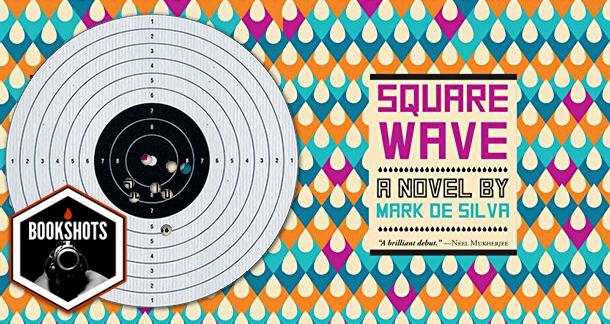 Mark De Silva, formerly an editorial staffer on the New York Time's opinion page, now a freelancer for the paper's Sunday magazine. Square Wave is his debut novel. More info at his website.

From the book's back cover:

Carl Stagg, a writer researching imperial power struggles in 17th century Sri Lanka, ekes out a living as a watchman in a factionalized America where confidence in democracy has eroded. Along his nightly patrol, Stagg finds a beaten prostitute, one in a series of monstrous attacks. Suspicious of his supervisor’s intentions, Stagg seeks the truth with a fellow part-time watchman, Ravan, who hails from a family developing storm-dispersal technologies jointly funded by the Indian and American governments.

Carl Stagg. He spends a lot of time pondering and pontificating and bemoaning his girlfriend Renna because she loves him too much, or perhaps not enough. It isn't really clear.

This novel wouldn't really work as a movie.

There was none of the theater, then, the performance, of character, that could give away the shape of your soul—a shape, incidentally, almost always distinct from the one you were trying to project.

Square Wave is a sprawling work, but not in that good way. I really can't sugar-coat the matter, so I'll speak bluntly: this novel is Dull. The characters are all unlikable, sexist dudes, or else women viewed as sex objects in some capacity—be it Renna, who is only a girlfriend to other men and never a fully-realized person, or the sex workers (casually referred to as "whores" by the author) being brutally beaten by another ponderous man or else willfully accepting fruit smoothie douches (you read that right). The plot at times picks up speed and interest, but then devolves into plodding historical accounts, descriptions of musical instruments, and tedious philosophical jerk sessions. It all leads to somewhere in the end, but by the time De Silva gets there, we're too put out by all the boring, rambling men and their boring, rambling problems to really care. Sure, the novel is well-written, but without any substance it's all just pretty make-up and jewelry dolling up a rotten, hollowed corpse.