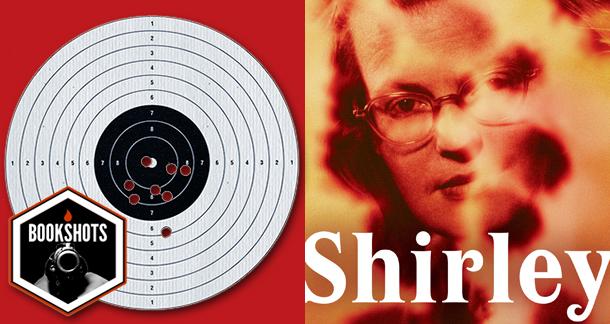 Up to this point, we’re heading in the direction of a straightforward mystery, and there’s nothing wrong with that. But then Merrell manages, in a masterly, Jacksonesque way, to skew the story into something else entirely.

A young couple move in with author Shirley Jackson and her philandering husband Stanley in the months shortly before the writer’s untimely death at the age of 48.

The Haunting of Shirley Jackson

Anything by Jackson herself.

Rose, newly married, newly pregnant, who arrives in 1964 Vermont to lodge with the writer, when her husband takes up a teaching post at the local college.

Rose comes across as the dictionary definition of self-effacing. As this is not an abundant quality in the current crop of acting talent, I’m going to go with Joan Fontaine (see Hitchcock’s Rebecca) or Julie Harris, who played Eleanor in the original film version of The Haunting of Hill House.

North Bennington, Vermont is 1960s small town – bitterly divided between the college population and the locals, surrounded by deep, dark woods. Oh yes, I would live there.

Several competed for first place, but this one captured my affection by nailing my exact sentiments about a certain famous author:

And he turned and picked up his glass, and said to Alan, “Have you actually tried Herzog? If Bellow gets any more self-referential, he’ll start writing with his asshole.

Ever play the Dinner Party Game? You know — that one where you choose the people, living or dead, you would most like to invite to your home to share a bottle of red and consume a plate of quiche and salad? Jesus, Einstein, Hitler, Marie Antoinette (bet she’d give excellent makeup tips) — they’re all on my list. I’d invite Lovecraft too, except he’d probably sit in a corner and cry. The game gets into our curiosity about the famous and the dead. What were they really like? we wonder. Was Jesus the kind of hipster who sneers at people’s immoral food choices? Did Einstein have a great line in dirty jokes? Could Hitler do accents?

If, like me, you’re a huge fan of the small but beautifully crafted output of horror writer Shirley Jackson, then she would be on that list too. Jackson, who died in her sleep from heart failure, left behind four children, a husband, a shedload of short stories (they were how she made her living) and a handful of novels. But not just any novels. Her penultimate book just happened to be The Haunting of Hill House, the book Stephen King describes as having one of the (if not *the*) finest opening paragraph. In any novel. Ever.

But the dinner party game is just a game, unless you are Susan Scarf Merrell, in which case it is a book in which Shirley Jackson once again presides over a dinner table, available to us via the gaze of Rose, the mousy child-bride of handsome academic Fred. The couple lodge with Shirley and her lascivious husband Stanley through a long cold Vermont winter. Through Shirley, Jackson lives again. We get to hear her talk. We get to eat her terrible meals. We begin to delve into the odd, fraught, complicated business that was her marriage and her life.

If that were all Shirley the novel represented — a chance to satisfy our curiosity about what kind of a person could write something as dark and psychologically twisted as Hill House — then it would itself be nothing more than a curiosity, and for around half the book, this is what I believed the story amounted to. Rose observes the family. She hears stories about a young co-ed who disappeared years ago. She understands that Shirley may outwardly tolerate Stanley’s infidelities, but that inwardly she deeply resents them. Rose, pregnant with her first child, begins to appreciate why the local townsfolk whisper about Jackson’s reputation as a witch.

Up to this point, we’re heading in the direction of a straightforward mystery, and there’s nothing wrong with that. But then Merrell manages, in a masterly, Jacksonesque way, to skew the story into something else entirely. ‘I am not Eleanor!’ Rose cries, denying her similarity to the lead character in Jackson’s famous book. Rose tries to wake Jackson’s sleeping daughters and fails. People act as though she is not there; speak to her in asides, almost as if speaking to themselves. You begin to wonder who Rose is, exactly. How real she is. With a chill you realize that everyone at your invented dinner party is hanging on every word you say. You realize that you are not the host of the party, but the guest – that you are the observed not the observer. You begin to wonder if you might be the figment of someone else’s imagination.

It’s a magnificent twist and one which Merrell, to her credit, does not overplay. She contents herself, as did Jackson, with hinting, provides an ending which satisfies both possibilities – the ordinary mystery and the story about a writer conjuring  a subject into reality – and leaves us to make up our minds about which version we prefer.

Jackson, at the head of the table of phantoms, would smile and approve.

This sounds like my kind of thing, and makes me want to read Hill House as well.

Too bad I'm your editor and had to read all the spoilers.

Yeah, just as well you took out the part where I let slip that Shirley is actually Darth Vader in disguise.