Bookshots: 'Lincoln In The Bardo' By George Saunders 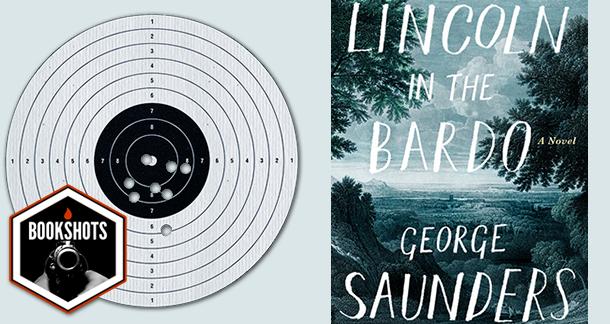 Lincoln in the Bardo

Bardo’s stylistic, absurd prose is a cause for celebration.

Wee Willie Lincoln (Abraham and Mary Todd Lincoln’s youngest son) dies, becomes a ghost, and then hangs out and is scared shitless by other ghosts, most of whom don’t realize they’re dead.

Pretty much anything by Kurt Vonnegut or Thomas Pynchon.

Hans Vollman: Prosperous business man crushed by a beam just as his second wife—who was forced to marry the much older Vollman—has fallen in love with him and is ready to finally consummate their marriage. Vollman, of course, doesn’t realize he’s dead.

Roger Bevins III: Homosexual man from your typical uptight, bourgeois 19th century family. Roger decides to off himself, but then changes his mind at the last second. Yeah, he doesn’t think he’s dead either.

Willie Lincoln: Dead son of America’s greatest President. He kind of knows he’s dead, but is having a hard time of it.

On other days, everyone she met manifested as a giant mustache with legs.

I’ll be blunt, I’m not a fan of historical novels. Don’t get me wrong, I love what novelists such as Ellroy, Baker, Atkins, and Abbott have done with the sleazy side of American history, but if a novel takes place in the 19th century, it’s just not my bag. I can say the same thing about ghost stories. Sure, if the ghost(s) in question have taken possession of a little girl or a house and are doing all kinds of crazy, evil shit, I’m all over it. But if the book focuses on a bunch of benevolent spooks standing around talking about how much they miss being alive, it goes without saying that you’ve completely lost me. In fact, the only way I would read a novel like this is if it was written by an author whose been a personal hero for twenty plus years. Then, and only then, would I have even the slightest interest in reading such a novel.

And it just so happens that George Saunders—a writer, who for me, is as close to a hero as my jaded ass has—decided to write a historical ghost story as his first novel. And the thing is, it’s not all that bad. In fact, it’s kind of the first novel you would expect Saunders to write.

Probably the best way for me to describe Lincoln in the Bardo is as melancholy absurdism. It’s a meditation on loss, the preciousness of life (and the absolute ridiculousness of it), and of how humanity is so unwilling to let go of the dead. The ghosts who occupy Lincoln in the Bardo aren’t the ones who are holding desperately onto life (and if they are, it is because they are in denial that they’re even dead). It is, instead, the living who are held fast by their former loved ones, even if said loved ones rarely, if ever, come to visit their graves.

Much like Saunders' satirical forefathers, Kurt Vonnegut and Thomas Pynchon, you either love or hate him with very little middle ground in-between. For longtime fans of Saunders, Bardo’s stylistic, absurd prose is a cause for celebration. For the less adventurous types who need their art spoon fed to them, or don’t want to be intellectually challenged while reading, just go ahead and skip this one. For everyone else, Lincoln in the Bardo may not be what you would describe as a read-in-one-sitting kind of novel, but it will stick with you long after you've finished it.