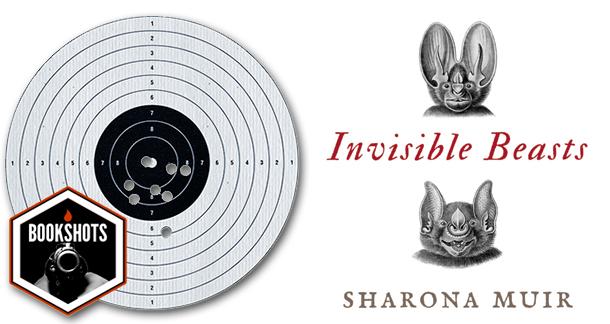 A peculiar, whimsical book with some very original ideas.

Sharona Muir, author if The Book of Telling, and Professor of Creative Writing at Bowling Green State University.

Sophie has an extremely rare genetic trait that allows her to see creatures that are invisible to everyone else.

It's a very fitting title, and I don't think I'd change it if I had the choice.

Sophie, an amateur naturalist and writer of field guides about unseen animals.

I pictured the narrator as being a bit like Emily Browning's character from the movie version of A Series of Unfortunate Events.

Invisible Beasts takes place across some very diverse climates. Some of them are habitable, while others are...less so.

Human beings are the most invisible beasts, because we do not see ourselves as beasts.

Invisible Beasts is a peculiar, whimsical book with some very original ideas. The writing has a unique aesthetic born of a series of keen observations based on biological rhythm. Surprisingly existential, it’s filled with explorations on what separates human and animal, as well as some of the things we may have in common. The text is written in a guidebook style, with various entries on the different invisible beasts that Sophie has encountered. This structural choice is a dual-edged sword; on the one hand, the guidebook field notes are interesting stand-alone anecdotes, but they do make the reading a bit choppy. These aren’t purposeless diversions, however, and they exhibit some skilled writing and secondary observations on human behavior through the lens of a naturalist cataloging animals.

Not a great amount of time is spent on Sophie’s personal life—she is, after all, on a serious quest to catalogue the most endangered of all species, and has little time for social niceties. There is some development regarding the relationship between Sophie and her sister, but it’s less of a focal point and more of a side note. Rather a shame, as the glimpses at Sophie’s character are quite compelling, and it’s easy to imagine the kinds of places Muir could take a more linear tale. Readers who pick up Invisible Beasts expecting a traditional story thread will likely be disappointed, but there is still reward enough for those who continue on through the book.

Those who are not daunted by the lack of strong narrative will find that the pages move very quickly, as Invisible Beasts is not an extremely lengthy work. Muir’s various animal concepts range in varying degrees of believability, but many are eccentrically charming. My personal favorite of the beasts were the Keen-Ears, creatures with hearing so excellent, they can detect the pulse of an owl flying overhead, or the sound of blood coursing through vessels. There is also an Antarctic Glass Kraken. If that doesn't intrigue you, I don't know what will.

Invisible Beasts does something that not a lot of books strive to do. It doesn’t make firm statements or try to draw readers with a complex plot or characterization. Its real purpose appears to be highlighting the true bizarreness of life on earth and all the planet’s tenants. Keeping that in mind, it’s easier to accept Invisible Beasts as an erudite guidebook to the “animals” that walk unseen among us.