Bookshots: 'In the Course of Human Events' by Mike Harvkey 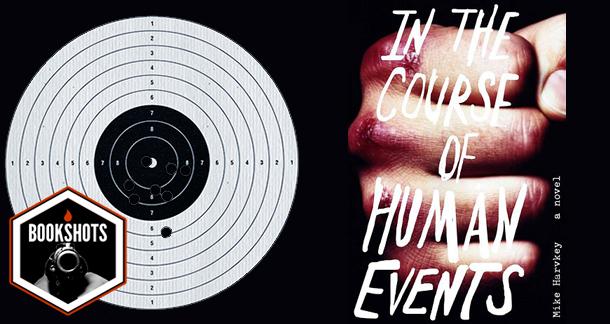 In the Course of Human Events

Can I invoke Steinbeck at this point? And okay, that comparison may seem overblown, but it’s not without some merit.

Michael Harvkey, native Missouran, up and coming literati, and black belt in karate.

Trapped in a decaying Missouri township, young Clyde Twitty finds a father-figure and direction for his life when he meets charismatic patriarch Jay Smalls.

The Art of Class Warfare

Clyde Twitty, washed up on the strandline of life at the grand old age of twenty.

A substantial part of the action takes place in the ghost township of Lick Skillet. I am a sucker for ghost towns, so yes please.

Reconciling with Tina made Clyde want to do something nice for her, so he bought one of Hitler’s dog paintings.

There’s something about ghost towns, isn’t there? You walk the empty streets and skirt the rust-pocked vehicles, observe the weeds growing from the cracks in the tarmac, the house roofs decorated with trees, and you think about impermanence and the shortness of human existence and how awesome it must be there at night. Then you drive away to where you live and it never once occurs to you that one day, in a hundred years or possibly less, some person might walk your street and find it creepily satisfying to observe the tree growing out of the roof of your house.

So what happens to those who once lived in these deserted relics — the owners of the vehicles, the ones who built the houses now decorated with saplings? In the Course of Human Events tells the story of one of these: Clyde Twitty. Amiable, aimless, not too bright, Clyde is a twirling leaf in the current of life, swept aside by the force of events. The economic downturn deleted his town’s main employer; now he works for a rental car company part time, supplementing this with minimum wage shifts in the pet section of the local Walmart. Clyde’s dim awareness of the vacuum presented by his future is amplified when he meets Jay Smalls, a self-styled martial artist and proto-survivalist, whose burning sense of purpose makes Clyde feel for the first time that his life might have a point.

Jay also has a lushly ripe teenage daughter, Tina, to dangle as bait, and an extended family to keep Clyde on his toes. Jay has grievances: against the Jews and the blacks and government conspiracies aimed at keeping ordinary folks down. Jay also has a plan.

Can I invoke Steinbeck at this point? And okay, that comparison may seem overblown, but it’s not without some merit. The Course of Human Events bears a family resemblance to The Grapes of Wrath, with its big themes played out through the lives of small people. The writing is as adept, as plain. If there is a key difference, it might lie in the note of gentle satire that Harvkey introduces (see my favorite sentence for a fine example). He presents his characters with sympathy — despite their actions, I liked them all — but can’t resist the occasional touch of mockery. But what justifies lining up In the Course of Human Events on a shelf at least close to Steinbeck's classic is that like The Grapes of Wrath, here we have a book which intends to provoke: right from the nod to the Declaration of Independence in the title, to the white-knuckle finale. In our post-crash world of foodbanks and unrepentant bankers, it’s probably about time someone once again used fiction as a battle cry.

And like the ghost towns, In the Course of Human Events has a haunting, plangent charm. Walk its streets. Commune with its departed. Remember that one day the house with a tree growing out of its roof might be yours.