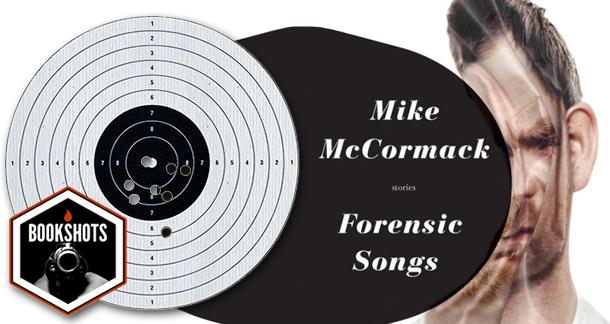 A roster of insular, haunting stories that leave a dark, empty impression.

Mike McCormack, author of two short story collections and two novels. He won the Rooney Prize for Literature in 1996.

At its center, characters struggle with everyday life’s inability to resist change, and a constant failure to connect.

There are different characters in each story. They are all losing, or have already lost, their grip.

I could see characters in Forensic Songs played by Amy Adams and Edward Norton.

I would not want to exist in any of the various settings within McCormack’s stories. No way.

In such moments he was nearly content and he would sit there until Susan entered the room and saw that look on his face that told her she was never a part of his happiness.

Forensic Songs presents a roster of insular, haunting stories that leave a dark, empty impression. If you share my reading sensibilities, you will have to take a moment in between each one as a comedown from the vast loneliness that consumes McCormack’s characters.

Some stories play around with the potential of what’s to come, and with situations that are just left of reality. In ‘The Last Thing We Need’, the first story in the collection, the only man to not have written his childhood memoirs causes a stir. ‘Prophet X’ deals with electric women and technology as the next religion and way of life. These worlds are still recognizable, but different from the present. It's unsettling.

All homes and families are broken. Lacking the proper communication skills needed to repair their circumstances, lives and relationships in Forensic Songs remain at a standstill. ‘The Great Lad’ focuses on two brothers who are reunited after seven years, but choose to immerse themselves in resentment rather than joy. In the collection’s title story, a husband and wife use a television show to indirectly comment on the problems in their marriage, leaving no room for real, concrete conversation about their state of affairs. I want to look away from the page, but I can’t, as I continue to witness them dig a deeper grave. Each story serves as a reminder of how difficult it is to really connect with another person, and I can’t help but wonder if we actually ever do.

The most unassuming, but perhaps my favorite, story in the collection is ‘From the City of Dolls,’ in which a young woman sits down next to a man at a pub and tells him a story. Because of a heart condition, she used to faint constantly, as did her sister and mother. She is now fitted with an electrical device above her left breast that kicks her heart rate up if it falls below a certain level. The man feels it. She tells him she’d like to trip the device while making love. Before he has time to get too flustered, she adds that her boyfriend tries hard to make it happen. She leaves, and the man remains the same, but, of course, also changed somehow. It is gorgeously executed, and despite being about a woman with an electrical device implanted in her body, contains the most hope for humanity.

Despite my favorite story’s grain of hope, McCormack ultimately takes our world and reduces it to the crumb of a thing it has always been. This is a game, we don’t have nearly as much control as we think, and yes, we will all die in the end.

Man, I could use a drink.