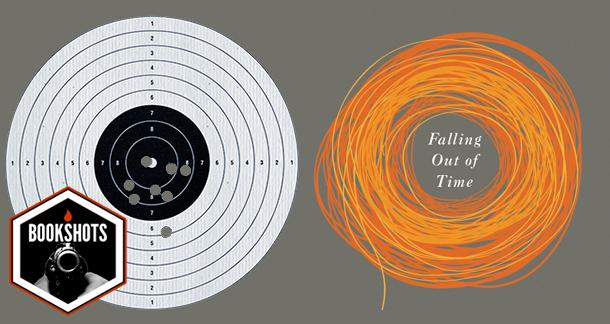 Falling Out of Time

After his son's untimely death, a grieving father wants to determine where the boy has gone, so he starts walking. Eventually, everyone else in his town starts walking with him. I'm trying to remember if there were any other pertinent plot points, and...nope, that's pretty much it. Also, it's kind of a play? But it's also poetry. But it's a novel. I think.

All Our Kids Are Dead

Tlooth, Our Town, maybe The Alchemist. It's a pretty unique work.

TOWN CHRONICLER narrates most of the story, which primarily revolves around MAN (later WALKING MAN), although there is also DUKE, MUTE WOMAN IN NET (::spoiler alert:: not mute for long!), WOMAN WHO STAYED AT HOME, ELDERLY MATH TEACHER, and CENTAUR.

Literally anyone in the universe. There are no real physical descriptions for most of the characters. There's a lot of vagueness and poeticalness going on here in general, actually.

Considering that this town seems to be inhabited exclusively by people whose children have died, I would not qualify for residency. Nor would I want to, honestly.

In August he died, and
when that month was over, I wondered:
How can I move
to September
while he remains
in August?

Why do I always get the most traumatizing Bookshots? I've been a bit glib thus far in my review, but mostly that's to cover up the Intense Emotional Emotionings that Falling Out of Time provides. The entire book is devoted to mourning lost children, so things get a bit deep and teary and oh god, can we maybe not talk about this anymore? I'm not a parent, but this book still hit me pretty hard at times; I honestly don't know how someone who has actually lost a child could get through this thing.

That being said, it's one of the most beautiful works of art I've ever read. As I mentioned, it's kind of a play, and all of these different characters intermingle and exist solely through reference and dialogue. It's also very clearly meant to be poetry, though, with its line breaks and heightened language and allegorical/fable-like qualities. Still, I think it's technically a novel? But really it's one long drama poem thing. Whatever, it doesn't matter: the point is that it's dripping with metaphors and strange imagery and characters who react quite dramatically to the deaths of their children (understandably). At first it seems like only the WALKING MAN is struggling with this kind of grief, but soon he's joined by others, and together they seek to discover death through life and life through death. It's really difficult to describe because so much of the text is abstract or an analog for a depth of emotion that is incredibly hard to verbalize.

Apparently David Grossman's own son died in 2006, and Falling Out of Time is this epic attempt to put into words the fact that he had no words for what he was feeling. There is a lot of growth and motion on this journey he takes through seemingly lifeless characters, but it's much more fluid than the traditional five stages of grief. I say "lifeless" because so may of the characters start out that way, at least partially down the road towards admitting that life holds no meaning for them anymore. What they had thought was their life has been taken away, and the only choice they have remaining is to walk into the unknown in an attempt to get that life back, not caring if they lose what little they have left.

I'm discovering a lot of my thoughts and feelings about Falling Out of Time as I write this, but I think that's mostly because there isn't really one simple book-review-length concept or emotion that the reader is supposed to take away. It fosters a lot of introspection, which I find useful and important. I think the read could be incredibly helpful for anyone in mourning, especially parents who have suffered the loss of a child, but only if they're ready to confront the idea of moving on and leaving some of their grief behind. It's so easy to feel like you're dishonoring the dead if you forget them for even a second, but remembering can hurt so much. The characters in Falling Out of Time strive to find a middle ground, or as WALKING MAN puts it so eloquently as he nears the end of his journey:

You loved us, and were loved,
and you knew that you were loved.
I asked if I could make one more request.
I'd like to learn to separate
memory from the pain. Or at least in part,
however much is possible, so that all the past
will not be drenched with so much pain.
You see, that way I can remember more of you:
I will not fear the scalding of memory.