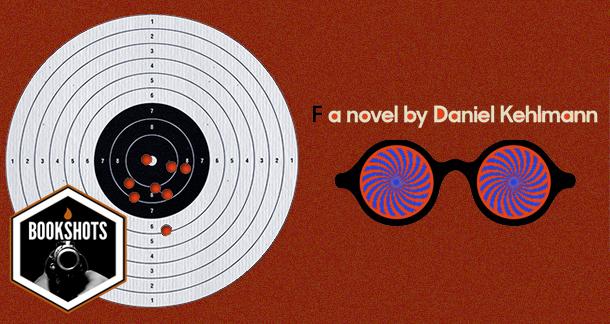 A great book, stunningly written, but I wouldn’t recommend reading it if you are prone to melancholy.

Arthur, an armchair philosopher, wannabe writer and deadbeat dad, takes his three sons, Martin, Eric, and Ivan, to see a hypnotist. Although a staunch non-believer in the mystical, after being hypnotized Arthur empties out the family savings and disappears. Now they only hear from him when his new book comes out. But while Arthur is out living his dream, the story follows each of his three sons as they fail to live their own.

F reminded me of Bertolt Brecht’s plays, but I can’t say I’ve honestly read another novel like it.

Martin is an overweight priest with no faith, simply going through the motions and hoping to feel something. Eric is a financier with no money—his firm has become an elaborate pyramid scheme in a desperate effort to keep afloat while he slowly loses his mind and his wife. Ivan is a painter with no confidence in his talent, so he has become a curator who forges the works and eventually the entire career of another artist.

Martin the faithless priest would be played by Jonah Hill. Leonardo DiCaprio would play Eric the failed financier, and Joseph Gordon-Levitt would play Ivan the fraudulent artist.

The setting doesn’t get much attention in this book. While the names of streets and places are all in German, without them you could easily picture this story taking place in any major city in the Western world. But if I had to stay with these characters, no. Emphatically not.

A conversation between Arthur and his granddaughter:

F succeeds fantastically as an exercise in style and an exhaustive character study. Even the most uneventful scenes are written in carefully crafted prose that is a joy to read. Almost the entirety of Eric’s chapters are spent inside his head without it becoming repetitive, cliché or boring. And while none of the characters are likeable people, you still become invested in what will happen to them. But F isn’t really about what happens, it’s about how the characters live with it. Almost all the major plot events happen “off-screen” so to speak, and the chapters pick up following one of the protagonists as they struggle to get on with their failed lives.

My only critique, and this is more about personal preference than any shortcoming of the novel, is that F is the most relentlessly depressing book you will ever read that isn’t about war or disease. Everyone is so unhappy, their lives so unfulfilled and meaningless, and it only gets worse. In the first few chapters you hope that the story will reach that turning point where if things are not improved, it at least looks possible for them to get better. F crushes all such hopes early on, and then calls back to them once more in the final chapter just so it can grind them to fine powder beneath its heel before its abrupt end, leaving you a hollowed shell of a person. You start to wonder if you’re not another failed dreamer, just going through the motions because you have nothing better to do. In conclusion, it’s a great book, stunningly written, but I wouldn’t recommend reading it if you are prone to melancholy.