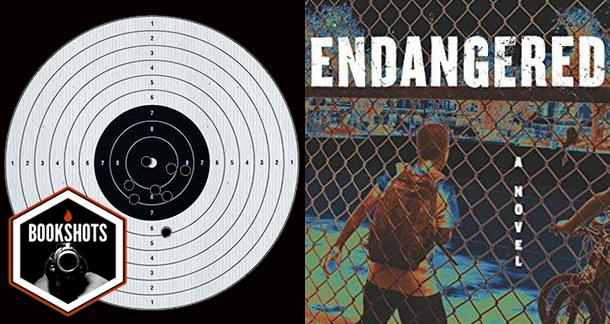 Jean Love Cush, a journalist and radio talk show host from Philadelphia. This is her first novel.

I was absolutely outraged by Malik’s plight, so much so that I often had to put the book down and take a breather.

Malik Williams, a fifteen year old black kid in Philly, was standing on the wrong corner at the wrong time. After being beaten and arrested by the police for a murder he didn’t commit, Malik faces life in prison. His case is taken on by a lawyer with the Center for the Protection of Human Rights, who argues that in America young black men have become an endangered species, and deserve at the very least the same protections our government would afford a disappearing animal. While his mother is not thrilled about her son being compared to an animal, she is willing to do whatever it takes to save him from a justice system determined to lock him up and throw away the key.

Honestly, Endangered is pretty perfect, but if I had to change it, I’d call it Lost Boys.

Janae Williams, a young, unwed mother working double shifts to make ends meet (just barely). While the media and the prosecution is more than happy to reduce her to the caricature of a stereotype, Janae never gives up on her son, telling the world that Malik is a child who never did anything wrong while drawing attention to the fact that our justice system is turning kids as young as eleven into convicted felons at a shameful rate.

Calvin Moore, a very successful young black lawyer who initially thinks that since he made it out of the ghetto, anybody can do it. But when the facts of the case prove him wrong, Calvin finally agrees to help the CPHR and do some good for his blighted community.

Janae would be played by Taraji P. Henson (currently on Person of Interest), while Idris Elba (of The Wire) would make a good Calvin.

Between the brutal savages on the police force and a district attorney who seems sadistically devoted to shoveling minors into adult prisons for life, the Philly of Endangered sounds like a pretty unfriendly place.

On the news, it was a big story, not because Troy had been murdered, or because her son was the suspect, but because it was the twenty-ninth murder in the twenty-two days since the new year began.

Endangered does a lot of things very well. It’s certainly educational, full of disturbing facts and vignettes of terrible injustices carried out under the law. Even as a white guy, I was absolutely outraged by Malik’s plight, so much so that I often had to put the book down and take a breather. While all of the characters fit the bill of many stereotypes that are prevalent in today’s society, they all manage to break them in interesting, non-cliché ways. It holds a mirror up to prejudices you didn’t even know you had.

But there is one terrible storytelling flaw in the narrative, and it only becomes more pronounced as you draw closer to the last page. There is a totally unnecessary romantic subplot between Janae and Calvin, played out in cringe-inducing scenes that seem to be lifted from the script of Pretty Woman: Calvin takes her out to dinner at nice restaurants, buys her fancy clothes she can’t afford, and finally shows up at her house and puts the moves on her the very night he gets her son released from jail. There is more than one scene where this basic conversation takes place:

Janae: Oh my! I’ve never had anything this nice before!

Calvin: You deserve it, because I find you attractive.

It may not be technically illegal for a lawyer to get romantically involved with the mother of his client, but it is completely unethical and cheapens Calvin’s growth as a character. It makes him look like a creep who didn’t care about the institutionalized extinction of his race until it affected a woman he was attracted to. While the message of the book is important enough that I think everyone should read it anyway, I have to say for the benefit of all the other rookie fiction-writers out there that not every story needs to have a romance. If it doesn’t belong, your reader will reject it like a mismatched organ.