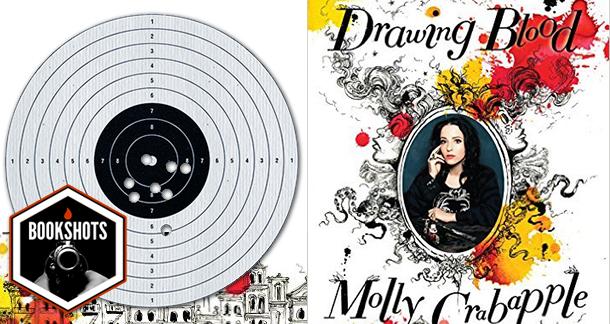 Crabapple does an excellent job of maintaining her casual and inviting tone even when discussing difficult subjects.

This is real life, and real life can't be plotted, duh.

If you've got a better pun than Drawing Blood for an artist's memoir, I would love to hear it. The best I could come up with were PAINt and Unpaletteable. It's a pretty fantastic title. Because she's an artist, but this is really personal stuff, get it?

M Train; Girl in a Band; Down the Rabbit Hole: Curious Adventures and Cautionary Tales of a Former Playboy Bunny; It's What I Do: A Photographer's Life of Love and War. Memoirs, basically. Do you like memoirs? It's a memoir.

Mostly NYC, so nah, but a bunch of other places, too, so maybe.

The restaurant's plastic tables were set down right in the river; our feet dangled in the water as we talked, and I sketched imperial ruins in the distance.

By the time I realized this wasn't the right book for me, it was too late. I'm a fan of Molly Crabapple's art and her work for Vice, but I'm not a fan of memoirs; I mistakenly assumed the former would negate the latter.

I'm not going to go into tremendous detail on why I've never been able to enjoy memoirs—suffice it to say that they always read like humble brags to me: look where I've been or look what I've done or look what I've survived. I know that's not fair and that it's naïve to make such broad, sweeping presumptions about an entire segment of literature, but it is what it is.

Still, as I said I like Molly Crabapple's art, and I respect and appreciate the work she does to promote and illuminate various social issues that are important to me. I was interested in how she came to be who she is and why she approaches life the way she does, and I wanted to read about the personal history her tweets and columns often allude to but to which I wasn't privy. I was partially satisfied. Drawing Blood is primarily a series of loosely connected anecdotes, one and then I did this after another, without much purpose other than to provide a general sense of the author's personal history. It's certainly a vivid personal history, and Crabapple does well painting her scenes (pun so very much intended), but the overall voice and focus of the writing didn't do it for me.

To call the writing melodramatic or juvenile would be misleading, especially since the early chapters primarily deal with the author's childhood, when the events were melodramatic and juvenile. I never felt that the book moved past this early mode of recitation, though. To be fair, Crabapple does an excellent job of maintaining her casual and inviting tone even when discussing difficult subjects like rape, racism, and run-ins with the police. It was as though I was smoking pot with the author on some friend of a friend's back patio while she told me her life story. Sometimes that can be a lot of fun, but it isn't terribly engaging, and one has to be in the mood for that kind of thing.

There's a lot of really interesting stuff in here. Crabapple journeys through continents and identities and heavy emotional, social, and political issues, and her attitudes and approaches to these situations are often easily relatable. There are other aspects and choices that aren't as easily relatable, but that's kinda the point of a memoir, to document those choices that others may not have made. I personally have trouble finding a point of entry into memoirs for that very reason, though: I usually don't care very much about the minutiae of a single person's life and choices. I have my own minutiae, my own personal illogic.

Of course, that didn't stop me from coming back to Drawing Blood each time I put it down. I could see every scene so clearly, even without Crabapple's beautiful illustrations. I don't know that I ever cared about her journey, or Molly Crabapple the Protagonist of Her Story, and there were many times where I was tripped up by the word choices and dramatic pauses and pointless asides, but I kept going. I wanted to see if the next scene would be as vivid as the last. I wanted to go to these places that she'd been, places I may never explore for myself.

I don't know that this is a book that I would or wouldn't recommend. I was glad to experience it, but I don't know how long it'll stay with me. Maybe I'll remember these scenes forever, or maybe I'll forget them by next week. Maybe this book will change your life, or maybe it'll bore you to tears. It's much harder to review books like this, books that might be good, but might not be good for you, personally, for whatever reason. It wasn't for me, but I was able to find things to enjoy anyway.

Try it out. Maybe you'll like it; maybe you won't. If nothing else, the illustrations are worth the attempt.