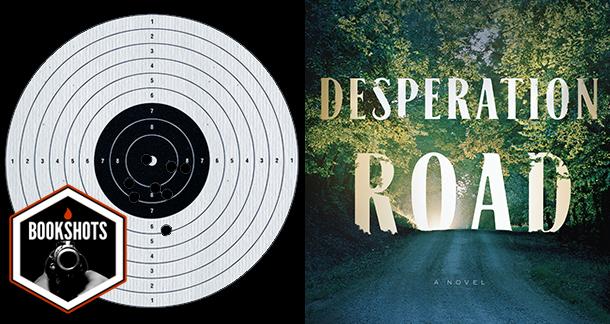 If you’re a fan of books about drunks getting into brawls and flexing their muscles and aiming shotguns at motherfuckers, then you’re going to love 'Desperation Road'

Michael Farris Smith, author of The Hands of Strangers.

A young, homeless mom finds herself involved with the death of a police officer and scrambles for an escape route.

No Sense in Hope

Russell - recently released from prison after serving 11 years for manslaughter.

Maben - homeless single mother hitchhiking back to her hometown.

Mississippi - well, no, but only because mosquitos think I’m delicious.

She had discovered that once things started to go bad they gathered and spread like some wild, poisonous vine, a vine that stretched across the miles and the years from the shadowy faces she had known to the lines she had crossed to the things that had been put inside her by strangers.

If you’re a fan of books about drunks getting into brawls and flexing their muscles and aiming shotguns at motherfuckers, then you’re going to love Desperation Road. The first fifty percent of it is basically two different novellas set in the same town. One novella being about Russell, a man released from prison after serving eleven years for manslaughter, and the other being about Maben, a homeless mother who runs into a perverted scumbag cop and ends up killing him.

Smith is an expert at naturally following each character as they act and react to the various shitstorms that rain upon them. Exposition plays a big role in Desperation Road, perhaps a bit too much. Too much looking back instead of forward. I would have preferred some of the backstory to be revealed through dialogue rather than flashbacks, but it’s not too much of a distraction.

Russell also frustrated the hell out of me, given that he just served eleven years for killing somebody while drunk-driving, and after he’s released he doesn’t seem to drive anywhere without a beer between his legs. Maybe it’s realistic that he doesn’t show any signs of fixing himself, but goddamn, dude, maybe you should cut back on the booze.

Like any book where the first half consists of two separate novellas, the two characters eventually meet up. Their merging is inevitable and, thankfully, makes sense. I enjoyed the majority of Desperation Road and recommend it for anybody who digs Daniel Woodrell.

Read it with a shotgun and liquor bottle nearby.