Review by Christopher Shultz December 9, 2014
In: 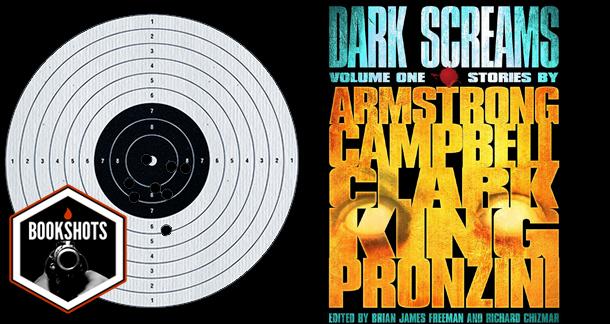 Bookshots: Pumping new life into the corpse of the book revie

Stephen King, Kelley Armstrong, Bill Pronzini, Simon Clark and Ramsey Campbell. The anthology was edited by Brian Freeman and Richard Chizmar, both of Cemetery Dance fame (though this book isn't being released through CD's publishing arm, but rather through Hydra). More info here.

The first in "a mind-bending new series of short-story collections that push the boundaries of horror and dark suspense to the bleeding edge."

The "book jacket" (as it were) describes Dark Screams: Volume One as the first in "a mind-bending new series of short-story collections that push the boundaries of horror and dark suspense to the bleeding edge." To that end, each tale blurs reality to some degree, and things aren't always quite what they seem.

Anything by Stephen King, any of the contributing authors' previous works, or Cemetery Dance magazine.

I'll focus on the protagonist from King's tale, "Weeds." His name is Jordy Verill, and he's not a very bright individual, to put it nicely; a real country-bumpkin-lunkhead, to put it harshly. He touches some space goo from a meteor and unleashes an infestation of alien grass on his unsuspecting little country town.

No less than Stephen King himself played Jordy in the classic omnibus movie Creepshow (written by King, direction by George Romero). The short film was played more for laughs I think, while King's original tale is pretty unsettling. If someone did a "gritty reboot" they'd probably cast Billy Bob Thornton.

Let's see: we have a small country town ("Weeds"), a cabin somewhere in the Washington woods (Kelley Armstrong's "The Price You Pay"), a mental institution (Bill Pronzini's "Magic Eyes), some kind of sewer (Simon Clark's "Murder in Chains"), and a colony of houses situated along a canal (Ramsey Campbell's "The Watched").

No to the first four. Campbell's setting sounds charming, despite all the crime and disgraced cops hellbent on exacting revenge.

This one from the aforementioned "The Watched" by Ramsey Campbell:

The nights grew longer, closing like claws around the days, leaving many of them smudged with a twilight of fog along the canal.

Dark Screams: Volume One is a solid collection overall, with the King and Campbell bookend pieces being perhaps the strongest offerings here. I hadn't read the source material for "The Lonesome Death of Jordy Verill" (Romero's Creepshow adaptation), so it was a real treat to see it on display. The story has only been published a handful of times, so for completist King fans who haven't gotten their hands on "Weeds" yet, Dark Screams is a must-have.

All other tales in this anthology are new and published for the first time here, including Mr. Campbell's "The Watched," a story that proves his literary prowess and propensity to unnerve are as strong as ever. The watery setting, mentioned above, is unique and integral to the overall plot in numerous ways. Furthermore, since we experience the supernatural horrors through the eyes of a child, we're never quite sure where imagination ends and reality begins, all to great effect.

Aside from Bill Pronzini's well-written "Magic Eyes," which was by turns humorous and unsettling, I had trouble connecting with the other stories in this volume. Kelley Armstrong's "The Price You Pay" started off well, but it became a bit too mired in plot twists that challenged—and ultimately wore down—my suspension of disbelief. "Murder in Chains" by Simon Clark is a splatter-fest without much attention to plot, which just isn't to my taste. I know there's an audience for "gore-without-much-more" out there, and perhaps this tale will stand as a beacon for them, but it's just not my cup of tea.

That being said, volume one hooked me well enough that I'm anticipating the next four installments, and thus I would still recommend picking up Dark Screams. It's only three bucks after all, and the entries from King, Campbell and Pronzini are worth the price of admission alone.