Review by Christopher Shultz October 5, 2015
In: 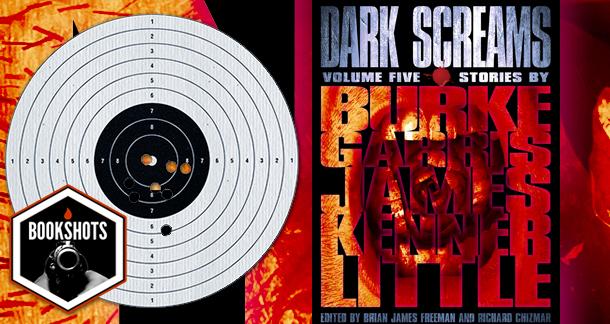 Volume Five also offers some of the most lush imagery and evocative prose of the series, in particular the entries from Garris, Little, and especially Burke, whose story is my personal favorite.

According to the book's blurb, the authors featured in this entry "pry open a sarcophagus of horror and dread," a fitting assessment for this collection's blend of dark humor and weird, supernatural fiction.

Though there are five different protagonists in Dark Screams Volume Five (encompassing the five short tales collected therein), I'll introduce you to Jack Tarrington, the protagonist of Mick Garris's lurid "Everything You've Always Wanted," a story reminiscent of Tales from the Crypt. Tarrington's a filmmaker with one big hit under his ever-increasing belt, a redneck cannibal picture called Taxed. He's the guest of honor at a Horror Con in Indianapolis, and his regal treatment there seems all too good to be true.

Indianapolis (Garris's entry)—no; New Orleans ("The One and Only" by J. Kenner)—yes; an unnamed European burg, a bit dilapidated and abandoned ("The Land of Sunshine" by Kealan Patrick Burke)—probably not; Southern California ("Mechanical Gratitude" by Del James)—sure; unnamed suburbs ("The Playhouse" by Bentley Little)—probably not.

An eternity passed beneath her silent attention, until abruptly, and with a wider smile than he had seen thus far, one that tore the corners of her mouth and almost split her face in half, she leaned over and shoved her face into his, the sparks in her eyes burning coals in a dying fire, and she spoke two words on a breath of ashes.

I feel I'm beginning to sound redundant with these Dark Screams reviews, but I cannot help showering praise on every single installment in this ongoing series, with this latest being no exception. I suppose it's no surprise given the editors Richard Chizmar and Brian James Freeman, who have certainly proven their merit as publishers of quality horror fiction with Cemetery Dance Publications over the years. And yet, the consistency of said quality contained within these digital pages never ceases to amaze.

In the case of Volume Five (and Four before it), the presence of a thematic through-line strengthens the ties between the otherwise disparate stories, thus creating a more solid sense of substance and weight to the volume. Here, we see "inconvenient revelations" surface in all five narratives, from Jack Tarrington in "Everything You've Always Wanted" facing for the first time the years ahead of him, the wasted decade behind him, and the untended roots of his creative desires, to buried indiscretions resurfacing in Kealan Patrick Burke's nightmarish "The Land of Sunshine," to the protagonist in Bentley Little's "The Playhouse" realizing the lure of regression as an escape from the pressures of adulthood (including a mean, unloving husband), every story features a character learning truths they'd rather not know—but of course, given the nature of horror, they often have no choice in the matter.

Apart from thematic concerns, Dark Screams Volume Five also offers some of the most lush imagery and evocative prose of the series, in particular the entries from Garris, Little, and especially Burke, whose story is my personal favorite. The ghosts, demons, revenants and objects of otherworldly transport will—as any agents of uncanny design in horror fiction should—linger long after the eyes have left the tangible words behind. Even if certain tales aren't your personal cup of tea, one cannot argue against their memorability.

As of yet, there are no other upcoming Dark Screams volumes in the works, but I do hope the series continues, as they are a constant treat to read. If you haven't checked out any of the previous installments, do so ASAP. After all, it is October, and while someone such as myself needs no excuse to consume horror of all mediums year-round, Dark Screams One-Four and especially Five are perfect reads for the Halloween season.