Review by Christopher Shultz August 3, 2015
In: 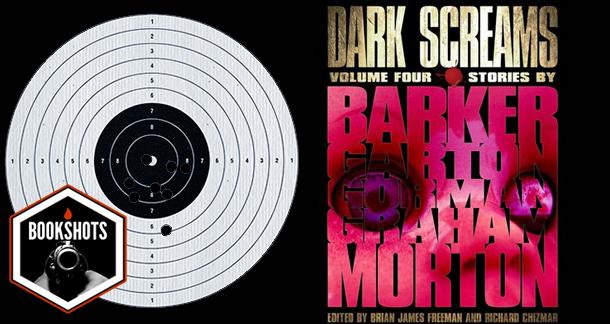 Fans of horror of every variety will find something to love in these pages.

According to the book's blurb, the authors featured in this entry "lead readers down a twisted labyrinth of terror, horror, and suspense..." Where the Barker and Morton pieces are concerned, "bittersweetness" also fits.

Acceptance (See The Verdict for an explanation.)

The other Dark Screams volumes, Cemetery Dance magazine and, in the case of one story in this collection, Buffy the Vampire Slayer.

I'll focus on Lisa Morton's "The New War," as it was my personal favorite of the five tales. The story follows Mike, a World War II veteran laid up in a VA hospital, terrorized by a shadowy creature that seems to prey on the elderly and dying men around him.

Given that Mike is a bit of a curmudgeon, who else but Harry Dean Stanton?

We have a small town in England on All Hallow's Eve (Clive Barker's "The Departed"), the aforementioned VA hospital in Lisa Morton's tale, a suburb in America plagued by a Thing ("Sammy Comes Home" by Ray Garton), a very small town in Utah (Ed Gorman's "The Brasher Girl"), and a Horror-Con terrorized by a real horror ("Creature Feature" by Heather Graham).

Despite the conflicts detailed in the first and last settings, I'll say yes to those, but nope to the other three.

This passage from Barker's story stands out not only as a wonderful, stand-alone sentence, but also as a fantastic opening hook:

It was not only painters who were connoisseurs of light, Hermione had come to learn in the three days since her death; so too, were those obliged to shun it.

In my review of Dark Screams Volume Two, I wrote, "If this upward trend in quality continues, we are sure to see amazing things in the volumes to come."

Indeed, every volume has surpassed its predecessor in terms of quality, making Volume Four the best yet. Part of what makes this entry to the series so great is its thematic through-line of acceptance, a concept we see pop up in all five stories. Clive Barker's "The Departed" deals with the ghost of a woman who can't let her previous life and her child go, and thus witnesses the consequences of clinging to the past.

In "The New War," Lisa Morton explores this idea of accepting one's mortality not from the perspective of the recently deceased, but rather through the eyes of a delusional man potentially on his last days, a man wrestling with demons both external and internal.

Acceptance of mortality also plays into "Sammy Comes Home," whereby author Ray Garton delivers a kind of "sometimes dead is better" message (though his story is just as much Alien or Invasion of the Body Snatchers as it is Pet Sematary, touching on issues of trust and logic vs. conviction).

The past lurks around every corner in Ed Gorman's "The Brasher Girl," which gives us a deeply unsettling view into a mind disturbed both by external factors and the protagonist's previous relationship, which ended with a wound in his heart he cannot heal.

Finally, Heather Graham provides a more "lighthearted" end to the anthology with "Creature Feature," a possible homage to the heroics and ultraviolence of Buffy the Vampire Slayer and The X-Files. But while Graham's tale isn't quite as heavy as its brethren, the theme of acceptance still emerges out of the narrative. Here we see characters who only survive the real-life terror inside a Horror-Con by trusting their eyes and their "sixth senses" rather than their logic or reason—or, accepting the possibility of unexplained, supernatural events.

Collectively, Volume Four constitutes the most cohesive, narratively enriching and entertaining Dark Screams entry to date. Be it the presence of genre icons Barker and Morton, stories from the lesser-known but equally talented Garton and Gorman, or the pure fun of Graham's tale, fans of horror of every variety will find something to love in these pages.