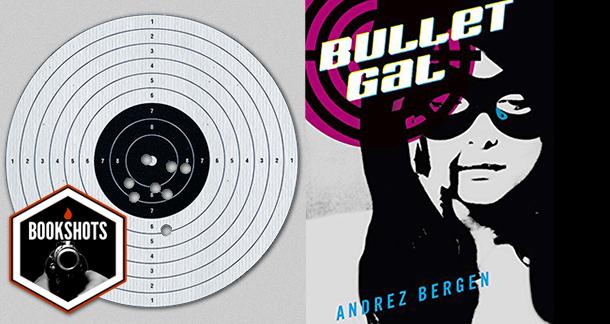 A refreshing take on an old story that manages to create a lived-in and idiosyncratic world with vibrant characters to occupy it.

Andrez Bergen has had an eclectic career as a musician, novelist and comic book writer, amongst many other things. Little Nobody in his music, he launched the IF? Commix publishing label in 2013.

Originally a bit character in Who is Killing the Great Capes of Heropa?, Bergen’s 2013 novel, she died in the opening prologue. But for some reason Bullet Gal stuck with the author, and his next book, Depth Charging Ice Planet Goth, ended up being a prequel about Mitzi before she became Bullet Gal. That was followed by a 12-issue comic book series, and now this novel is adapting and expanding on that. Part science fiction, part neo-noir, part superhero, Bullet Gal stars a teenager with two guns and a bad attitude.

Ghost in the Shell Casing

Neuromancer, Brian Wood’s The Couriers, anything by Warren Ellis

Mitzi – a 17-year-old girl, who is newly arrived in the city of Heropa. Wielding her father’s dual pistols, she takes it upon herself to assassinate all the criminals in the city. As Bergen himself describes, she’s “basically a joint homage to Lara Croft, Buffy, Tank Girl and golden age comic characters Sand Saref and Bulletgirl.”

Lee – a superhero that can divide himself into eight identical copies, who becomes a mentor for Mitzi. He’s mysterious and rigidly tough in his training of the young girl. He plays a big part in the regulation of the “Capes”, or “Bops” in Heropa.

Mitzi – Chloë Grace Moretz. Is that a bit of a cheat, considering she already played a similar character (Hit Girl) back in 2010’s Kick-Ass? When you do something right, you do it right. She’s tough, she’s smart and she can pull off a foul mouth. This isn’t just in Kick-Ass but also during her sixth-season role on 30 Rock. She can also convey vulnerability and longing better than most young actresses.

Lee – The original artwork doesn’t give a ton away, but Lee is definitely a white guy in his late 30s, early 40s with close-cropped hair. But with casting a role like this his race doesn’t even matter, so really it’s a matter of nailing that stern, mysterious type. In this case someone like Michael Fassbender would really work, as he has a sense of history in his eyes, a barely-reserved anger and sense of intelligence and sophistication.

As described in the blurb about Who is Killing the Great Capes of Heropa?: “A vast, homogenized city patrolled by heroes and populated by adoring masses. A pulp fiction fortress of solitude…”. Sounds like a pretty cool place to me. I’ve always been a small town mouse, so urban environments don’t really appeal to me. But the idea of being in something out of an old Fleischer cartoon with a modern twist is infinitely appealing. Although I would probably get killed within the first week.

The front of the paper was set aside for better fluff to consume over brekky. It bore a big splash image of costumed clods in fight poses; something the text explained had to do with a gold bullion heist gone south. Three of the heroes smiled out from an inset snap, bearing more ridiculous names: Milkcrate Man, Major Patriot, and the Big Game Hunter.

I’ve mentioned it before, but I’m a bit tired of first-person perspective. It feels like a lazy tactic to create mystery through a limited perspective, and not everyone can pull off the passage of time when the main character is experiencing it all live. But Bergen found a loophole with Mitzi, as she’s a truly intriguing character: old for her age, cynical but insightful, smart but not portentous. And that accent. Or should I say, the Australian slang that permeates the text is just delicious. See the above quote for “brekky.” The book is full of that kind of stuff, and I love it.

I’m also a bit tired of post-modern, deconstructionist takes on superheroes. I’m as big a fan of Alan Moore and Frank Miller’s 1980s stuff as the next comic book fanboy, but the last year has left me bitter and jaded about this for the wrong reasons. I enjoyed Batman v Superman and Civil War for their own reasons, with the latter arguably executing a similar plotline with better results, but I’m wary of them on a conceptual level. Putting too close of a lens on superheroes reveals how silly they are, and that’s fine—embrace the silly. But instead, this push since, say, The Dark Knight for more adult takes on the material seems to miss the point. Superheroes solve crime with fists; that’s ridiculous. So indulging the basic concept means not picking it apart.

Bergen understands that superheroes are childish wish fulfillment, and not dissimilar to Mark Millar with Kick-Ass, he dismisses heat vision in favor of hot lead. Guns are just cooler, according to Bergen, and can blast through any bullshit of number-themed kidnappings or bankrobberies modeled after playing cards or giant type writers. In that way there’s a breezy, sarcastic smirk to the novel, as well as most of Bergen’s work, that makes it engaging and enjoyable.

It’s also hard to pull off the kinetic four-color action of superheroes in the written word, but Bergen acquits himself.

All in all, a refreshing take on an old story that manages to create a lived-in and idiosyncratic world with vibrant characters to occupy it.