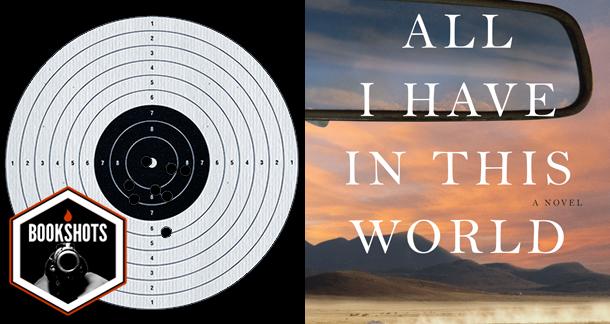 All I Have in This World

A beautifully crafted, extraordinarily human novel which elevates our daily lives to their rightful place of significance.

Michael Parker has authored six novels and been extensively published in various journals. He is currently a professor in the MFA Writing Program at the University of North Carolina Greensboro.

Maria returns to her small Texas hometown for the first time in ten years and runs into Marcus through a chance encounter at a used car lot. Both are running from their past lives, and together as strangers they build the strength to face their pasts and move forward.

The obvious choice would be Pinto Canyon, Texas, which is the Texas town where the bulk of the story unwinds.

This is definitely a worthwhile read if you like "Texas-y" books. Don't be mistaken—it's not an epic like Phillip Meyer's The Son or a work of Cormac McCarthy. The scope of the novel is much smaller and more introspective, but this doesn't negate its craft or its story. This book is a great choice for readers who prefer the intimate over the grandiose.

Marcus is an unmarried man fleeing his failed Venus flytrap farm—and his creditors. Unsure of what he is doing—and of what he has been doing—he looks toward the future with the realization that he needs to face facts and move forward.

Maria has returned home for the first time after her boyfriend's suicide ten years earlier. During the last decade, she's lost contact with her family and missed her father's death. Still consumed with guilt, she moves back to her mom's house and begins to face her past.

I think Mark Ruffalo would be an excellent Marcus.

Surprisingly, the first first two actresses which spring to my mind are Jill Hennessy and Kate Lyn Sheil, but neither are truly viable for the role, as neither are anywhere near Maria's half-Mexican heritage. Jill's languid height and her angular facial structure evoke how I imagine Maria—attractive, but set apart. Kate Lyn Sheil (who looks nothing like how I imagine Maria) is excellent at capturing the external detachment that I think is so central to how Maria interacts with the world.

While the novel focus on contemporary life in rural Texas, it also follows the life of the twenty-year-old Buick from Ohio to Austin, Texas. There's also a small amount of travel within Texas, and I have to admit, as a native Austinite, I would certainly be willing to live in Texas once again.

She said she'd be back in a few days, and because some part of her she was not proud of but could not quite control wanted to punish her mother, she said, instead of good-bye, "Take care."

All I Have in This World is a fairly small book. There is little action; the characters are few and the scope is rather narrow. But don't be mistaken into thinking that a book like this one has little to offer. Michael Parker's focus brings us into intimate quarters with his characters and the world in which they live, and he artfully portrays the smallness of their lives in such a way that makes their pains and their mistakes truly universal.

Parker's ability to look at the small moments and inner monologues that make us human doesn't prevent the novel from being fun. Marcus is fleeing the consequences of his rather impulsive effort to establish a Venus flytrap trap ranch and museum on his family's land in North Carolina, and throughout the novel he looks back wistfully at this rather humorous folly. Parker decision to bring his protagonists together over a twenty-year old Buick (which has an entertaining history of its own) is certainly amusing, and he's masterful at creating the touches of humor that occur in everyday situations.

In the end, All I Have in This World is an excellently crafted work of fiction, exploring the lives of "normal" people as they seek forgiveness from themselves and their pasts, and reconsider their definitions of love, friendship, and family. Parker's novel is a wonderful and wistful journey to redemption.

It's an excellent exploration of how we grow to love and accept the imperfections in ourselves, of how the everyday mistakes we make can define the course of our lives, and how the same everyday mistakes can redeem them. It's a beautifully crafted, extraordinarily human novel which elevates our daily lives to their rightful place of significance.