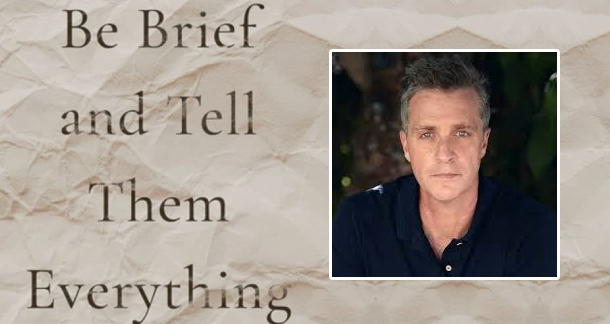 As I began to ruminate on Be Brief and Tell Them Everything, the new novel—it is a novel isn’t it? We’ll come back to that—by author and literary podcaster Brad Listi, I got stuck on an image of boxes within boxes, then I thought, no, that’s not the imagery I want, it’s more like Russian nesting dolls, that’s it.

Which might be correct, though it might also be that as I was reading the book—it is a book, right? Let’s come back to that too—and thinking about it, I also watched the new seasons of Russian Doll and Stranger Things and became attached to this concept of losing myself in ideas, clues and answers nesting within clues, ideas and answers, and so on, as a means for making sense of my sense of the book.

The book itself makes sense, full stop—a guy named Brad Listi who has a podcast wants to write, or is it finish, fabricate certainly, the book that has eluded him for years—but that doesn’t mean I could entirely make sense of my experience of consuming it.

There is this nesting thing happening in my brain, there is a public figure, Brad Listi, I kind of know because I kind of know the person on a personal level, though really I don’t, and I supplement what I think I know about that person by listening to their podcast, where said person, in this case Brad Listi, podcaster and author, talks about themselves and their life, including his efforts to write his second novel, which not unlike Russian Doll and Stranger Things, is parts metaphysical and horror story, involves the convoluted relationships and emotions that family brings, the effort to search for meaning and a desire to illustrate one’s personal narrative.

It is also a road novel.

A celebration of the potential for drug use to achieve something.

All that and a desire to illuminate the act of the creation.

As I said it makes sense.

Which, reader please note, is not a comment on quality. Be Brief and Tell Them Everything is gripping and sad and frustrating, transparent and ugly and beautiful.

I love a good gut punch.

It is auto fiction, the story of someone’s story, Listi’s, a literary regurgitation of some kind, an interpretation of the facts of his life as he knows them (and listeners like myself think we know them), and what it means to write that story, to attempt to make sense of the joys, frustrations, triumphs, failures and fears, so much fear, of living, parenting and creating.

A story I’ve been telling myself for a long time is that my identity has been shaped by the tragedies I’ve been witness to, and suffered through. The untimely deaths in particular. There have been too many of those. Accidents, illnesses, suicides. And of course Oscar’s health challenges.

I feel like maybe I’m not telling you enough about Be Brief and Tell Them Everything, and you’re right, I’m not, because it’s an experience, which really is the experience of entering someone’s experience in real time—the act of writing a book, trying to get pregnant, raising a child with special needs— and getting out of one’s own head so that any of the above is even possible in any sort of decent way at all.

It’s a journey, which may not be yours, it’s Listi’s, but he’s allowed us to join him on it—we’re also complicit in its execution and success, because we feel like we’ve been there every step of the way—and it’s painful and delightful, all the more so if you believe that you know anything about him.

Is that necessary to enjoy the book? 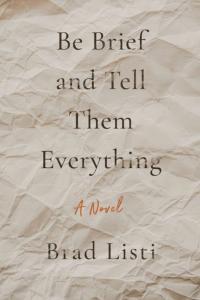 It’s a rumination on rumination, boxes within boxes, a visceral and vicarious invitation into someone’s head even as they’re trying to climb out of it.

Is that necessary for creation?

No, but it was for Listi, and that’s what we ultimately find by going on this journey with him.

Brad Listi had to write a book.

Because that’s what we do.

The we being writers.

Listi also had to find that book and he found it in excavating what he knew, and knows, which is all we ever do when we create.

Which is to say, Zapruder said, if you’re struggling with something, uncomfortable in some way, then maybe the best approach is simply to talk about that in the book, Chekhov said as much, too. Address it directly—aware of the fact that it’s not about solving anything on the page. Just to state the problem clearly, on its own, can be enough.

Authors, creatives, need to get whatever is nagging them out of their heads and our ego makes us believe someone will care.

People will care about this book, because many of us care about Listi, we listen to his show, he’s a presence in our lives, we believe we know something about him and we want it to all work out.

Even the creation of the book he’s talked about for all these years on his show.

Listi’s accomplishment is ours, and now I supposed he’ll have to start again, and we’ll have to follow him, because that’s how it works, rinse, repeat, boxes within boxes, marching forward all of it.

We create, we read, we ruminate and we have no choice in these matters.

Get Be Brief and Tell Them Everything at Bookshop or Amazon