You Can Now Read Your eReader on Take-off and Landing — Hurrah! 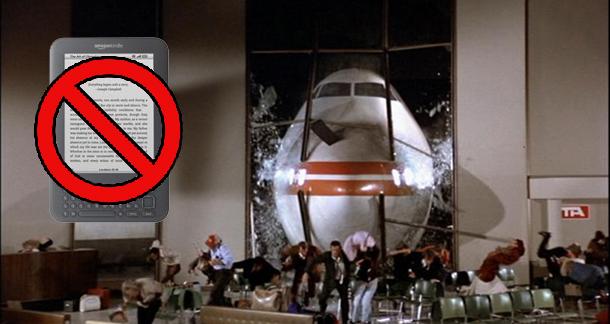 It seems like it’s taken centuries, but in a landmark decision, the Federal Aviation Administration has finally lifted the restrictions on using eReaders, iPads or mobile phones (not for calling, of course) while a plane is taking off or landing. It’s about time.

The rule change was expected, following repeated and persistent outcries that the small amount of electromagnetic radiation that devices like tablets emit do not in fact disrupt airliner controls. Still, talking on your cell phone when a plane is taking off and landing will be prohibited.

This factor has been proven for a very long time but, like searching for shoe bombs, has persisted amongst the people who make these kinds of decisions, meaning that I grumble every time I’m on a plane and get told to turn of my Kindle or mobile phone (my wife’s quite fed up with this, too — my grumbling, I mean). However,

The change may not be in effect for the next flight you board. The FAA has said that it’s up to individual airlines to roll out implementation of the rule change. Most will have done so by the end of the year.

I don’t care, so long as it goes away! Will you celebrate by using your electronic device next time you’re on a plane and the flight attendant comes down the aisle? I know I will! Now to get them to do that in the UK…

Awesome! I have a trans-Atlantic flight coming soon, this is good news!

I haven't air-travelled for eight years and don't have an e-reader, but I love the photo at the top of this column!