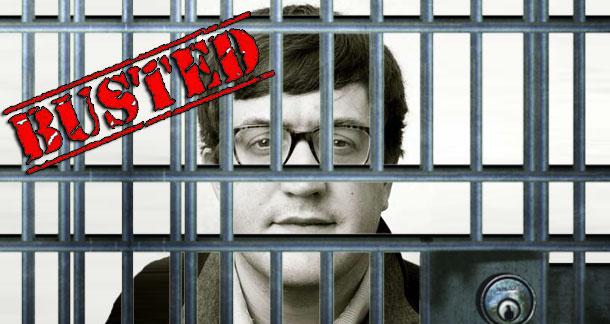 UPDATE: Spy novelist Jeremy Duns scored the interview pretty much everyone in the literary world has been clamoring for: He got Quentin Rowan, a.k.a. Q.R. Markham, to go on the record about his plagiarism scandal.

The "interview" is essentially an e-mail exchange that plays out in the comments of a blog post Duns wrote on the subject. It's pretty lengthy, and reveals some very interesting stuff. Markham, in equal parts, owns up to things while blaming them on the pressures of the publishing industry. He said he can "only compare it to other kinds of obsession, of addictive behavior like gambling or smoking: in that there was no need to do it initially, but once I'd started I couldn't stop and my mind kept finding ways to rationalize the behavior."

You can (and should) read the post and the "interview" at THIS LINK.

It always makes me sad to report something like this. Not because of the story itself, but because I know there's a few thousand aspiring authors out there who actually work hard and write their own shit, yet a sweet two-book deal from a major house gets wasted on a guy like Q.R. Markham.

So here's what happened: Q.R. Markham's debut spy novel, Assassin of Secrets, came out on November 3rd through Mulholland Books, the suspense fiction branch of Little, Brown and Company.  On November 8th the publisher pulled it, saying that it "lifted from a variety of classic and contemporary spy novels."  (We'll get more specific about that in a minute.)  Little, Brown then proceeded to cancel Markham's two-book deal and offered to issue a full refund to anyone who bought Assassin of Secrets.  Little, Brown president Michael Pietsch issued this formal statement:

We take great pride in the writers and books we publish and tremendous care in every aspect of our publishing process, so it is with deep regret that we have published a book that we can no longer stand behind.  Our goal is to never have this happen, but when it does, it is important to us to communicate with and compensate readers and retailers as quickly as possible.

Let's isolate part of that statement, the section about taking "tremendous care in every aspect of our publishing process."  How about the part where you make sure your author isn't ripping excerpts directly from other books?  Don't get me wrong, Markham pulled a scumbag move, but Little, Brown's people should have picked up on this.  Let's take a look at a few examples:

Assassin of Secrets (pg. 13): “His step had an unusual silence to it. It was late morning in October of the year 1968 and the warm, still air had turned heavy with moisture, causing others in the long hallway to walk with a slow shuffle, a sort of somber march.”

James Bamford’s Body of Secrets: Anatomy of the Ultra-Secret National Security Agency (pg. 1): “His step had an unusual urgency to it. Not fast, but anxious, like a child heading out to recess who had been warned not to run. It was late morning and the warm, still air had turned heavy with moisture, causing others on the long hallway to walk with a slow shuffle, a sort of somber march.”

Not an exact copy and paste job, but you can see the similarities.  Here's another:

AOS (pg. 13): “The boxy, sprawling Munitions Building which sat near the Washington Monument and quietly served as I-Division’s base of operations was a study in monotony. Endless corridors connecting to endless corridors. Walls a shade of green common to bad cheese and fruit. Forests of oak desks separated down the middle by rows of tall columns, like concrete redwoods, each with a number designating a particular work space.”

Bamford: “In June 1930, the boxy, sprawling Munitions Building, near the Washington Monument, was a study in monotony. Endless corridors connecting to endless corridors. Walls a shade of green common to bad cheese and fruit. Forests of oak desks separated down the middle by rows of tall columns, like concrete redwoods, each with a number designating a particular work space.”

And there's plenty more where that came from.  So far it's been confirmed that Markham ripped Bamford, Charles McCarry, Raymond Benson, Geoffrey O’Brien, John Gardner, and even Ian Fleming's Bond novels.  I'm going to go out on a limb here and say that this makes the whole James Frey thing look like jaywalking.

Also, this Publisher's Weekly starred review kind of cracked me up: "Quirky, entertaining ... fine writing keeps the enterprise firmly on track, and the obvious Ian Fleming influence just adds to the appeal."

Expect Q.R. Markham to fall of the map for a little bit after pulling such a robbery.  Remember kids, cheaters never prosper, but we'll go ahead and post a link to Assassin of Secrets anyway since it's now a collector's item. The book's Amazon ranking has already jumped from 43,996 to 1,034 since yesterday.

Sound off in the comments: Any predictions on how many years it'll be before Q.R. Markham tries to publish again?  How much blame should Little, Brown take for not catching this?

Keith from Phoenix, AZ is reading Growing Up Dead in Texas by Stephen Graham Jones November 9, 2011 - 11:52am

There's a ton of excerpts from Assassin of Secrets and the novels they were plagerized from right HERE. This whole thing is just plain sad.

Joshua Chaplinsky from New York is reading a lot more during the quarantine November 9, 2011 - 1:18pm

Did he think no one would notice?

In my opinion, yeah, he didn't think anyone would notice. Spy fiction is a fairly niche market with a small, but extremely dedicated fanbase, and I don't think he realized just how dedicated they were.

The sad thing is I kinda want to buy the book just to have because I know it's going to be somewhat rare. :(

I want to know what is the process that the Big 6 take to "discover" plagarism. I would assume that they might even have entire departments dedicated to this.

Do they insert the novel into some computer program that searches for pre-published phrases/words?

Or have these people just read every book published? Ever.

So does the assassin like kill secrets? Or people with secrets? Really dull title unless he kills sentient secrets, which would be badass but he wouldn't have had anyone to plagiarise from considering I don't think anyone has written a novel about that.

i recommend taking down the amazon link for his book.  i dont think it's fair to brandon to have his info under that book link.

Wow! And I thought my students taking papers from "Cheat.com" was bad. Maybe he did it just to see how soon he'd be found out. Like a dare? But it really turns my stomach.

So, this book is actually still for sale on Amazon? There is a boost of sales as a result of plagiarism? I didn't think this could be legal.

The sales boost is bizarre considering how well it's selling now based on its sales rank. Perhaps people are buying it because they think it will be a valuable collector's item since the book will probably go out of print very soon (like Jason Van Horn mentioned above).

Click on the Amazon link and we see that customers who bought this book also bought Fancy Feast.  A link?

Joshua Chaplinsky from New York is reading a lot more during the quarantine November 14, 2011 - 4:13pm

Ha. Crazy cat ladies like a good mystery. Or a bad one.

Seems like the guy has major psychological issues or he wouldn't have plagiarized. Writing commercial fiction isn't that hard (besides the boredom aspect of it). To me, I can only really understand someone's motivation for plagiarizing (if they're relatively sane) if either they're a student who doesn't really want to write a paper or an author who is under a deadline that he/she can't meet. Perhaps this author's reason for plagiarizing was the latter. Not sure because I don't feel like reading all his email responses that were made public (and I searched the page for "deadline" and nothing popped up).