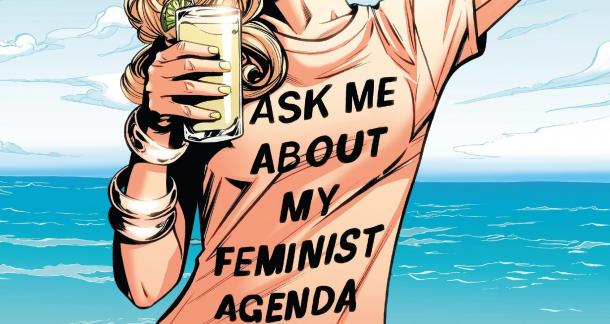 As of Friday there's been a lot of news running around about Chelsea Cain, Twitter, Mockingbird, Marvel Comics, and a cover featuring a character wearing a t-shirt emblazoned with the words "Ask me about my feminist agenda."

Let's go straight to the source on this one. Here's what Chelsea Cain said on her own blog:

I wanted to clarify what happened. I write (wrote) an 8-issue comic series for Marvel, called MOCKINGBIRD.  During the life of that series, the tenor on my Twitter feed changed.  Comics readers are 99% the best people you’d ever want to meet.  The other 1% can be really mean.  Perhaps that statistic holds up across humans, in general, but in my experience, this is a different kind of mean.  It’s misogynist and dismissive and obsessive and it thrives off taking down other people.  I’ve blocked 8 people in my many years on Twitter; 7 were on Wednesday...Every time an issue came out...I’d get lots of love and support.  And a handful of people who seem to thrive off making sure strangers feel hated. I guess it’s a way of being seen.  It’s not different than what most comic book writers deal with, especially female ones.  The tweets that bothered me were never the ones concerned with content; they were the ones that questioned my right to write comics at all, and were disgusted by the idea of a female hero having her own series...Wednesday, I had a bubble of these types of tweets.  Mockingbird had been canceled, and they were really celebrating...

These are selected excerpts from a single post, and you can read the entirety of the blog post here.

Shortly after the events described in the excerpts above, Cain closed her Twitter account due to a sharp rise of shitty mentions, replies, and generally awful Twitter traffic.

And during that time, the first trade paperback collecting issues 1-5 of Mockingbird saw vastly increased sales, and the hashtag #StandWithChelsea started trending.

There is definitely some controversy due to the fact that Marvel canceled the series before the release of the first trade paperback, where a lot of comics sales happen these days. However, if we look at the sales from September, Mockingbird issue #7 ranked 144 on the sales charts with 14,751 issues sold. To put this in context, Supergirl, which was ranked 8th that same month and was the highest ranking book featuring a female main character (excluding Trinity which featured Batman, Superman, and Wonder Woman in equal-ish roles), sold 90,247 issues that month.

Of course, Supergirl is an established character who also has a TV series to her name at the moment. And while Mockingbird sales weren't gangbusters, it was still beating a lot of great books such as Chew, Unbeatable Squirrel Girl, and Archie (I know a lot of you probably groaned at the mention of Archie, but the current iteration is SO GOOD!).

And so, is it fair to say that trolls got a book canceled? No. Unless we're willing to say that not buying a book is trolling, I don't think there's any way around the fact that Mockingbird was canceled by its publisher, and canceled before the online harassment ramped up.

As for the second question, did trolls boost sales of Mockingbird? 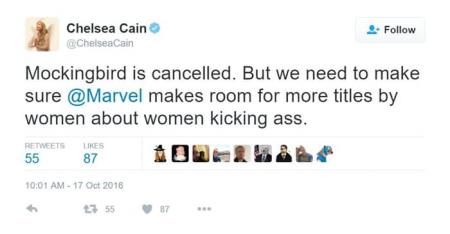 Here's the tweet Chelsea Cain sent out about the book, the one that presumably caused a bunch of weirdos out there to crap themselves with joy, tweet her about it, and eventually cause Cain to leave Twitter.

There was then an outpouring of Twitter support for Cain after she left. The tweets and retweets of the cover for issue #8 featuring the now-famous "Ask me about my feminist agenda" t-shirt came in droves. Hashtags ruled the day. And the first Mockingbird trade paperback's sales ranking rose dozens of places on Amazon over the weekend. As of Friday afternoon, I noticed volume one was already ranked in the mid-20's within its sales categories, and as of Sunday night, it's moved up to the top 10.

Did trolls end up causing sales of Mockingbird to increase? Almost certainly. And perhaps I could be more accurate in saying that trolls were trolling and a community of people responded by supporting Chelsea Cain and buying her work.

If I may be so bold, I think there are three really crucial takeaways here. There are certainly more, but three I'd like to highlight:

1. It's not cool to harass writers online. It's totally fine to not like someone's work, it's fine to leave an Amazon or Goodreads review describing how you felt about the work, but it's not okay to try and speak directly to a writer to tell them you think they suck. It's not cool to be that person, and you're giving a bad name to comic fandom when you do that. Chelsea Cain left Twitter, and a sales increase doesn't change that. I feel like there should be more to say about this, but there just isn't. Don't be a jerk. Don't celebrate a moment that stinks for someone else. We're all tired of it.

2. The more you try to put a book or an author down, the more it's going to bite you in the ass. Working in a book-centric industry, I can tell you that nothing revs up interest in a book like controversy. Fifty Shades was controversial. People forget The Da Vinci Code was controversial for its claims about religion. If you go online and smack talk a book, and especially if you attack an author in some way, you might as well go out and buy a dozen copies yourself, because you are driving sales. I know this sounds like I'm giving tips to jerks, but what I'm really trying to do is tell people that being a jerk has the opposite of the intended effect. So why not be nice?

3. At this point, though Marvel has expressed support for Cain and condemned online harassment, nobody has reversed the decision to end the book. If we want to see creators we love continue to create, and if we see people putting forth work that represents something we find culturally important, we have to BUY the work. And when it comes to comics, we have to buy them early. We can't be sure when a book is coming up for possible renewal, and it's at that time that the sales have to be great. If we haven't purchased the issues or pre-ordered the trade, there's not much hope.

By the logic of #2 there, Ghostbusters should have shot right past Titanic at the box office.

Community Manager
helpfulsnowman from Colorado is reading But What If We're Wrong? by Chuck Klosterman October 31, 2016 - 10:06pm

Or...is it totally misguided and jerkish of me to ask whether the movie would have done worse at the box office sans controversy?

Online harassment is not a new problem that one comes across. It has been there for a long time now. The authorities should come up with a comment filters that would avoid, bully and illicit comments from getting published. This discourages the writers and that can hamper their growth as a writer. Write essay for me  has more information on the topic. One can refer the page.

This book has inspired me to be making bets for Oscars every year! It is really inpirational! God bless the author of this book!