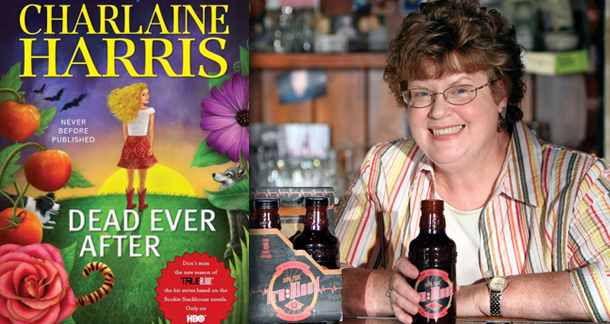 Fans. Every writer wants them, needs them, does their best to please them (unless you’re George R.R. Martin), and every now and again they turn around and bite you in the ass. Charlaine Harris, author of thirteen Sookie Stackhouse novels about a telepathic waitress in love with vampires, has found this out after an early copy of the last book in the series, Dead Ever After, was released by a fan in Germany.

The reaction to the ending of the series, which inspired the TV show True Blood, has resulted in “an outpouring of bile on Amazon, Goodreads and Harris's Facebook page, with thousands of comments posted by fans furious about the choice Sookie made”.

Harris told the Wall Street Journal that she had also received emails saying "if Sookie doesn't end up with Eric, I'm going to kill myself", as well as death threats.

Okay, that’s a bit out of control, regardless of how passionate the fans of the series are, and Harris seems pretty shocked by the reaction.

"I wrote the best book I could, and I'm confident I stayed true to the characters I'd been writing for so many years. It's disappointing to have people impugn my character in such a personal way, but I hope on the whole that many people are entertained by the book and find it a satisfying end to Sookie's adventures," Harris wrote on Facebook, prompting nearly 2,000 more comments, ranging from "We are disappointed and feel cheated and I personally regret I have contributed my bit to make you more rich and famous" to "Hated Dead Ever After and returned it for a complete refund".

So are the fans right or are they just getting carried away again? I think Neil Gaiman said it best in his article about George R.R. Martin. I doubt it’ll hurt Harris’s sales, but we’ll just have to see, right?

I read the first few pages of the first one and absolutely could not stand the Sookie character, although we watched and enjoyed a few seasons of the TV series. Actually, I don't like her much on the TV series either, but she's not narrating it...

Anyway, I guess that's to say I am the wrong person to ask about these books.

Reminds me of Misery.

I've read most of the books. They were one of my summer reading books, when I was exhausted from a semester of reading a lot of Chaucer in middle English, or some other early English text. People are being so dramatic. These adults are showing the same level of maturity I'd expect from a Twilight fan, who is pissed Bella didn't pick his or her favorite love interest. When I first heard about the responses, and read some of the reviews, I was really disappointed in her fans. Let's be honest, the books are not profound or great. They are enjoyable little romps, with some nicely cheesy bits.

The level of entitlement these people feel is astounding. It is worrying. When did readers suddenly start feeling like they had any control over the author, or should have a say in the outcome of books?

Dwayne from Cincinnati, Ohio (suburbs) is reading books that rotate to often to keep this updated May 14, 2013 - 5:03am

That is so cool. I'd love to be get people so into my books I was getting death threats as long as no one was trying to carry them out. Good for her.

Dwayne has a point. On the other hand, my spiteful side would love to ask them about their favorite character and then kill it in a short story.

Dwayne from Cincinnati, Ohio (suburbs) is reading books that rotate to often to keep this updated May 14, 2013 - 2:05pm

@Jack - I can't think like that because most times I try to make everyone who lives through the book suffer ever after. So really it would be like a minor reward to the person doing the death threat.