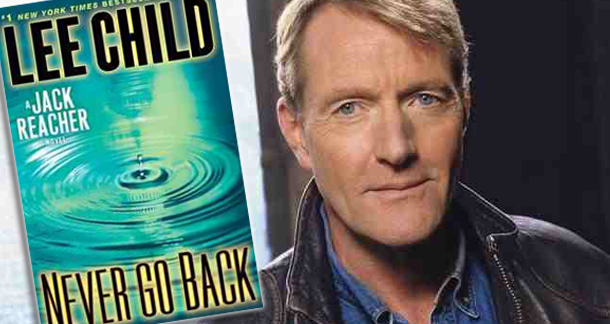 Writer’s often eccentric habits have been chronicled in intensive detail over the years, particularly with the culture of celebrity we've developed in the 21st Century. That said, it never ceases to amaze when a successful author admits to doing something like taking drugs while writing his best-selling novels.

Well Lee Child, creator of the very successful Jack Reacher series did just that this weekend in an interview with the UK’s Daily Mail, even going so far as to boast about how accessible his dealer is.

"I’ve been smoking weed for 44 years, five nights a week," the author confessed. "I’m the poster boy to prove it doesn’t do you much harm. I have a guy on speed dial in New York who comes over with a huge range of marijuana. I smoke it in a pipe because I’ve never been any good at rolling my own joints.”

In light of recent claims that Ernest Hemingway didn’t actually write while inebriated, I guess I have to applaud his persistence. Child also claims “he keeps his writing razor-sharp by working while high on cannabis” —  he isn’t the first person I’ve discovered functions better stoned than sober. And hell, who am I to argue with a guy whose novels are so successful, one is purchased “every two seconds”? Not to mention, Tom Cruise liked the character so much he had to play Jack Reacher? Wait…

Okay, I’ll admit that reading Child's books is a guilty secret of mine, but I don’t think this is going to convince me to try writing drunk or stoned again. I work better sober at the moment, and if it ain’t broke… What about you? Do you imbibe any sort of mind-altering substances before or during writing?

Never Go Back, Child's 18th Jack Reacher book, is out on August 28

I write down ideas when drinking or smoking weed. But I could never really create a text when stoned or drunk, it just don't work for me.

I write on coffee. Sometimes I just pour it directly into my ears.

Right—what Sofia said: caffeine for me. Lots of caffeine.

Nah! A writer that smokes pot? Pshaw! That's a good one.

I can't write after smoking a joint.  I get muddled, forgetful and confused.  However, I do take psychoactive drugs to inspire some of what I write.  If I can remember to write the thoughts down when I have them (sometimes its very hard to find a notebook on a mushroom journey).

Although - I recipricate what some of the others are saying - lots of friggen coffee.

Ah, the dear old Daily Maul. I read it because it has awesome material for the Sluttylemon podcast (eg how I got a boob job through hypotherapy, my girlfriend tried to strangle me with her boobs, boobs are the new boobs etc).

Think of it as a UK version of The Onion that doesn't realize its stories are made up.

Graham Paul Donovan from London is reading Lights Out in Wonderland by DBC Pierre August 21, 2013 - 2:16pm

I like the way he refers to the "...huge range of marijuana" available to him. Quite the connoisseur.

The only time the weed would have affected him was when he allowed Tom Cruise to play the part of Jack Reacher!!!

Well I am all for adults being permitted to have personal use. Many artists admit to being high to promote creativity. Thomas Jefferson grew hemp. The government was going to grow hemp and use it for clothing and paper. It would have protected our forests.Just like anything adult kids want it. Just like anything adult now it is a crime for them to purchase or possess it. If you want to discuss a gateway drug let's speak truthfully about alcohol. and domestics let's talk about alcohol, speeding dangerous driving, bank robberies, let's talk about anything BUT marijuana. There is no legimate concern for the legalization of marijuana except the people who are making their money don't want it to go legit. The government wants you addicted to their drugs and marijauna is non addicitve and they can't have that...

Just a nerdy grammar complaint. The first word in this article should be Writers', not Writer's. It is talking about multiple writers' eccentricities being documented over the years.

Ditto what Renfield had to say.  Lee Child is my top dog, #1 fave author, for his writing style, as well as the Reacher series.  Lee's glibness in interviews is amazing, and he comes across as very genuine.  I was even more enamored of him when I learned he kicks back in the evenings.

Out of respect for my main man, let's not misconstrue the sound bites here.  Lee has said specifically that he only partakes of weed in the evenings, when he is in 'idea-churning' mode, and does not smoke while he is actually writing.  I can completely identify with that.

Lee is the only author whose books I literally cannot wait to come out, and rush to the book store on the day they are released.  So yep, blaze on buddy.  And let's keep in mind, that doctors write RX's for things like Xanax and Prosac on a daily basis  That crap is legal, but God's own green anti-depressant is outlawed.  That is total crap.

Still, I'm sure that daily weed smoking is not the best solution. I prefer to pamper myself with weed only at the end of the working week to relieve the accumulated stress. These additional hints will take you to an online store with a great selection of cannabis seeds to grow. This approach will help you save money. Surely you know that cannabis girls give the best therapeutic effect for health.