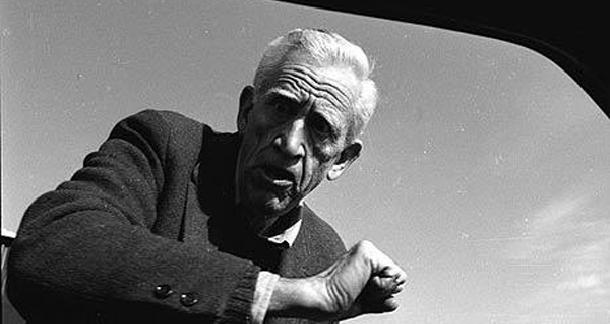 Imagine for a moment that your dad is out checking the mail when a photographer leaps out of the bushes and takes a photo as he recoils. (You're probably also going to have to imagine that your dad is famous, perhaps the author of some world-renowned book like Catcher In The Rye, otherwise the whole paparazzi thing is just confusing.) How would you feel if that "terrified, angry, startled, haunted" image of your father were plastered on t-shirts, enhanced with red eyes and yellow skin to make him look "more freakish and wild"? If you said, "Not too happy at all," you and Matt Salinger would be friends.

The son of author J.D. Salinger is not pleased with the crazy-faced t-shirt adorned with his notoriously private late father's image. Nor is he pleased with any of the pencils, mugs, hats, and other products bearing his dad's face. "If the reader has some kind of image of the author in mind, it changes things," he said. "And that's just something I'm trying to not just respect but maintain however I can." To prevent this sort of unauthorized merchandising, Matt Salinger has spent the last two years working with New Hampshire lawmakers on a bill that would allow family members to control the use of a deceased family member's image for commercial purposes.

On Wednesday, N.H. Governor John Lynch vetoed the bill, claiming it was too broad and could be detrimental to free speech because it lacked "clear exceptions for news and expressive works." Those sorts of exceptions were in an earlier version of the bill but were removed. Salinger says the bill features plenty of protections for legitimate uses of someone's name or image, but opponents, such as the Motion Picture Association of America and several video game companies, disagree and believe the bill should not be passed unless it specifically excludes news stories and broadcasts, plays, and movies.

The veto could be overridden with a two-thirds majority vote in both the Senate and House. It's an interesting issue of individual rights clashing with free speech. Who do you think is in the right here?

Joshua Chaplinsky from New York is reading a lot more during the quarantine June 14, 2012 - 3:17pm

They're coming to get you, Barbara!