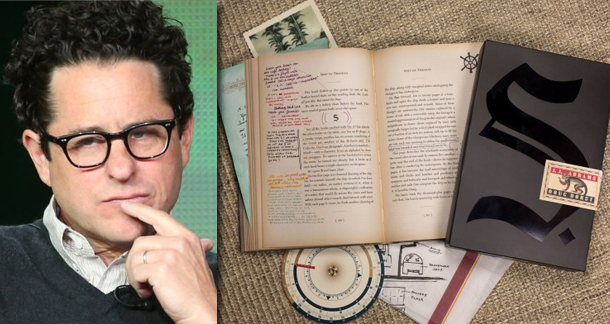 Of any group of people, I would have thought librarians to be the most imperturbable, but it appears they can get their knickers in a twist just like everyone else. According to The Hollywood Reporter, librarians are so “enraged” by the new bestselling mystery by director J.J. Abrams, S. — it made Amazon’s top 10 in the first week — they’re cancelling orders for it.

But one group unimpressed by the literary theater are librarians, who have been complaining to one another on message boards that the loose material is easy to misplace and reporting they have canceled orders — 50 copies at Cleveland's Cuyahoga County libraries alone. Many are irked that an elaborate Hollywood-style marketing campaign, complete with stylized trailers and a strict embargo, left them clueless about the contents of the relatively pricey book.

I haven’t seen the book yet, but I’m intrigued by the images and reports of it being “chockablock with maps, postcards and marginalia, all stuffed into a well-wrought re-creation of an old library book”. Fantastic! But I guess it could cause problems for librarians, if it’s as complicated as it looks.

Says Lesley Knieriem, a librarian in Rogers, Ark., who canceled her order, "I bought it sans review on the strength of the author name and online buzz, and boy am I sorry."

I don’t think I will be — do you? It does amuse me that a book could "enrage" librarians, but if you’re a librarian, would you be willing to take a risk that the book might survive intact? Or is it all just a bad idea?

There's a very interesting interview with J.J. Abrams and Doug Dorst about S. conducted by Neil Gaimain for the BBC.

Well, thank you irratable librarians for bringing this book into the news. I hadn't heard of it yet. Now, I'm interested.

Ha! This makes me laugh a lot. Thing is...my husband got the book the day it came out, and the librarians make an excellent point. Almost every page has some kind of insert...post cards, pictures, receipts, tickets. It's insanely beautiful and rich, but the thing is....there's NO way a library could keep track of all that stuff. And since each item is associated wtih a particular page...can you imagine the mess?

"Engraged" has to be a word thought up by a publicist to make a news story out of a simple case of librarians making the practical realization that it will be too difficult for them to circulate that book and ensure that all of the pieces come back. Canceling orders is not the same thing as being "enraged." Abrams has a good marketing team.

Joshua Chaplinsky from New York is reading a lot more during the quarantine November 12, 2013 - 10:21am

Not really an Abrams guy, but this does sound pretty cool.

Dino Parenti from Los Angeles is reading Everything He Gets His Hands On November 12, 2013 - 12:35pm

I bought it last week not knowing there was an avalanche of loose shit inside. Thankfully I didn't drop any of it, but I realize now this isn't one I'll be taking to the park. I'm eager to read it though.

Dino Parenti from Los Angeles is reading Everything He Gets His Hands On November 12, 2013 - 12:36pm

Here's why they're enraged:

"Many are irked that an elaborate Hollywood-style marketing campaign, complete with stylized trailers and a strict embargo, left them clueless about the contents of the relatively pricey book."

So Abrams' publicists "neglected" to inform librarians that the heavily promoted book that readers will want also contains a lot of stuff that will fall out and get lost and will be impossible to replace except by buying fresh copies.

If I was the librarian at Cleveland's Cuyahoga County libraries and I was about to spend $1,000 scarce dollars on books I can't circulate, I'd send Abrams a one-way ticket on Oceana Airlines, too.

Cannot wait to review this...

At first I wanted to know what Abrams wrote that ticked off so many libertarians. Then I was all oh, wait...

Griffin & Sabine by Nick Bantock has the same problem, but at least the postcards and stuff have their own sleeves. The problem is that they don't always make it back to the library shelves.

Oh my. A few comments:

Since when is a $35 book considered "relatively pricey" in library land? Most of the titles I order for my library are in the $80-$120 range. I'd consider $35 a steal.

I like that the Hollywood reporter sought out the most ridiculous-sounding person in my profession for the direct quote: "and boy am I sorry." Really?? Who talks that way about library materials? I purchased a book for my patrons written by a highly successful Hollywood director and boy am I sorry?

It's true that a book accompanied by lots of loose-leaf items poses a challenge. You pretty much have to assume that some things will get lost. Collecting everything in a separate envelope that you also check out with the book is the easiest way to deal with it, but that will obviously change the relationship between the materials and the book. That's life, not a reason to cancel your order.

ReferenceDesk from NYC is reading A Man Without A Country by Kurt Vonnegut Jr. November 14, 2013 - 8:25am

As a librarian, I can tell you that books like this are a serious headache. I wouldn't cancel any orders, but it would be great if they released a library edition with the ephemera printed differently, or something along those lines.