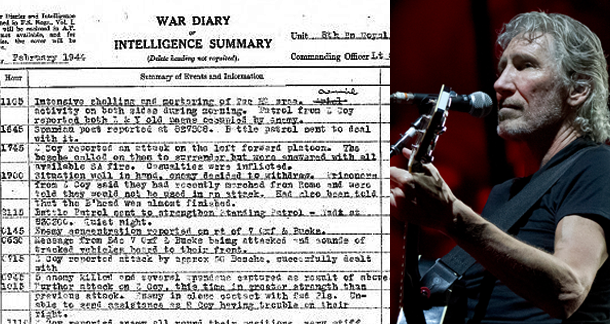 This seems a fitting story at a time of year when we remember our war heroes: Roger Waters, frontman and the creative force behind some of Pink Floyd’s biggest hits, never knew his father, who was killed during World War II when the singer was just 5 months old. It’s been a theme that runs through a lot of Waters’ work, most notably The Wall, “in which the disturbed protagonist, Pink, grows up longing for a father figure”.

Waters has returned to the theme in a new poem called Only One River, which he sent to the 93-year-old war veteran who found the time and place where Lieutenant Eric Fletcher Waters was killed.

The British veteran, Harry Shindler, who has spent years cracking the cases of soldiers lost in Italy, received the poem from a grateful Waters after he discovered documents revealing the exact time and place where the singer's father died during a German attack, shortly after the Allied landing at Anzio in 1944. "Waters is delighted and so am I," said Shindler from his home in Italy. "He is a man who has spent his whole life trying to find his father and now he's done it."

Shindler had never heard of Pink Floyd, but decided to help the singer after Waters visited the cemetery at Monte Cassino in Italy where his father’s name is listed. With persistence, he located documents in the National Archives in Kew about the fighting after the Anzio landing, showing Waters was killed during “stiff fighting” at 11.30am on 18 February 1944. His body has never been found.

"I was very angry," Waters has said about never knowing his father. "Because he was missing in action, presumed killed, until quite recently I expected him to come home."

"Waters didn't know where his dad was killed, but nobody had lifted a finger," said Shindler. The singer dedicated the poem, containing the lines “My father, distant now but live and warm and strong / In uniform tobacco haze” to Shindler, signing it “To Harry, with gratitude”.

You can read the full poem here (it’s about half way down).