Repeating Yourself Again: Journalist In Trouble For Self-Plagiarizing 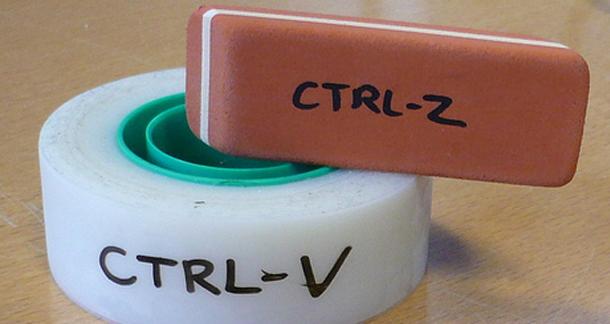 Skillful use of "cut and paste" might work in college, but one man just learned it won't fly in the real world. Journalist and author Jonah Lehrer has come under fire recently after he was caught recycling his own writing from The Wall Street Journal for NewYorker.com, where he was recently hired on as a staff writer. The passage in question comes from his recent piece "Why Smart People Are Stupid":

Here’s a simple arithmetic question: A bat and ball cost a dollar and ten cents. The bat costs a dollar more than the ball. How much does the ball cost?

Since this shitstorm began, four different people have begun checking his work, and it's been found that he's done the ol' "command+C command+V" at least 13 times across several magazines over the course of a few years. In a recent interview, he told a New York Times reporter, “It was a stupid thing to do and incredibly lazy and absolutely wrong.”

Whether you call it repurposing, self-borrowing, recycling, duplication of material, etc., does he really deserve this treatment? In my opinion, if someone is earning several dollars per word from a high-end magazine, they can't double-dip.

I've done a lot of work as a freelance artist and animator. If one company pays me to create a piece of artwork or a cute animation, I can't use that piece elsewhere. If a second company asks me to make something and I think, "Oh, I already made that for such-and-such-place! I'll just send them that file," that's wrong. Now, because these are snippets of his past articles that he's bringing into his current work, it's a little tricky. I think if he was paid to write the original articles, he shouldn't borrow from those older works; but if he wasn't, then why not post up the same examples and metaphors and such?

I agree, David. They are "his words" to do with as he pleases, however they aren't paying him to cut and paste, they are paying him for new, exclusive content--and I am sure he was aware of that. If he felt particularly attached to an example or metaphor, I think at the very least he could write something like "An analogy I always come back to when discussing this issue is..." or something. Even then, do you deserve pro-pay if you've only got one little bucket of points you are comfortable making?

I see it as more lazy than immoral. I mean, his thoughts are his thoughts and it's not like they're going to change over the course of his employers. But he obviously needs to reword or do something other than copy & paste.

For example, I do music reviews, essays, etc for the same website. Now, I have my opinions and there's certain themes I like to stress from time to time, depending on what I'm covering. I like to say a (song)writer has to "earn their words." For instance, how many tired songs have you heard about drowning loneliness in a bottle, blah, blah, blah when you know the dude hasn't done it - he's just writing cliche. But then comes along a true story teller, one who's put some miles on their shoes. In those cases, I like to point that out to my readers, that this is someone who's got some meaning behind their words and they're not just writing what they think they should. So I'll say they've "earned their words." You might find that phrase in maybe 2 or 3 of my articles. I've prefaced it with "I've said this before" or something like that, if I need to. I don't copy & paste the exact same thing, even though those three words have been printed before.

I don't think there's anything wrong with that, since that's my opinion on that particular subject and it's going to come up from time to time and bears repitition.

Joshua Chaplinsky from New York is reading a lot more during the quarantine June 21, 2012 - 2:09pm

I do that shit here at LitReactor all the time. Don't tell Dennis!