Penguin Takes a Leaf Out of Food Truck Book 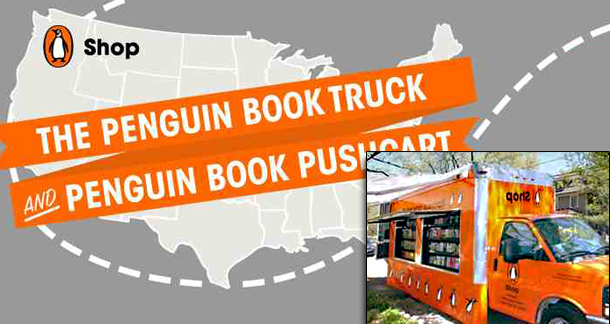 We’ve all heard of (or even seen) mobile libraries of one sort or another: namely, a van or truck that goes around part of the country to places where there isn’t an established library and gives the citizens something to read. And you’ve probably also seen food trucks – they’re kind of hard to miss after the umpteenth program about them on the Food Network. Now, Penguin has created a sort of hybrid of both in their new “Book Truck”. The Truck, along with a pushcart called “Book Pushcart”, surprisingly, will be unveiled at this week’s Book Expo America.

The 27-foot-long Book Truck contains two bookshelves with 96 feet of shelf space, LED lighting, awnings and café tables and chairs. The Book Pushcart was “inspired by the design of the classic New York City hotdog cart.” The mobile booksellers will travel the country, you can track them at the Penguin Book Truck site.

Unsurprisingly, the book will contain books from all Penguin’s imprints and will sell them to anyone who wants to buy, the idea being that you’ll be able to buy a book ‘on the go’ in unusual places. So, for example, The Pushcart is going to be in New York City, at the Delecorte Theater in Central Park for performances of Shakespeare in the Park’s 2013 season. They’re also going to hit “Tom Sawyer Day” at the Mark Twain house in Hartford, CT, the American Library Association Conference in Chicago, and “numerous other bookstores, festivals, library events and author signings throughout the year.” But perhaps the most unusual will be in October when:

…in conjunction with the National Steinbeck Center’s kickoff of the 75th Anniversary of the publication of John Steinbeck’s Pulitzer Prize-winning The Grapes of Wrath, (published by Penguin) the Penguin Book Truck will travel West on Route 66 from Oklahoma to California, following the route of the fictional Joad Family and stopping at numerous museums, universities and historical sites along the way.

Well, it’s a different way to promote books, I have to give them that, and harks back to some idealised “golden age of bookselling”, I suppose. But is the truck running on bio-fuel or electricity? More importantly, is it going to change anything?