Next E.L. James Novel to be Less Raunchy 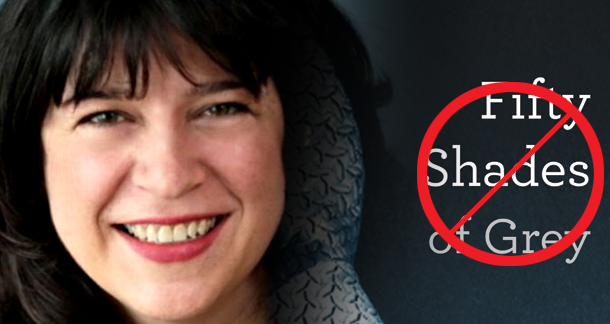 James has previously told readers that "I'm looking forward to bringing you some new love stories I've got planned", and that she is unlikely to write another book about the hypersexed stars of Fifty Shades, Ana and Christian. "Never say never – but they're on the back burner at the moment, as I have a few other stories to tell first," she has written on her website.

James also talked about the movie version of Fifty Shades, but revealed no one has been cast, and a filmmaker hasn't been chosen yet, “…so we are still a long way away from casting. I have some ideas...but it may not be who people expect.”

I find it interesting that she’s not going to use her name for the new novel and capitalize on her previous success — obviously she doesn’t need the money! Do you intend to read the new book when it comes out? Even if it contains less ‘raunch’?

Mistake on her part. Her skill level as a writer isn't going to cut it without the hype caused by the sex.

You can paint a turd gold but it's still a turd.

Dumb people will still buy her crap. Just look at how many trees were killed to churn out that poorly written Twilight garbage. That talentless bitch bred a whole army of fucked up brooding teenage not-quite-vampire worshippers. Now she's getting ready to unleash a bunch of sullen sexy aliens for kids to throw their money away on. Damnit.

I wonder how many writers criticize E. L. James, yet have never been paid a penny for their work, let alone published by any reputable mag? What are the stats on that? Probably similar to those who whine about Lena Dunham's success or cry about Stephanie Meyer's prose.

There are plenty of male writers who suck. Don't try to make it a feminism issue.

Oh, no, wasn’t trying to make it a feminism issue. Rather, when I write on this message board it’s stream of conscious, and I realized as I was composing that comment (to which you are referring) how female writers seem to be more often bashed than their male counterparts. Purely coincidental, surely. But if that’s all you got from that comment, you missed the point entirely.

I once knew this fat guy years ago who told me that my dieting methods wouldn’t work. He told me that he alone held the secret recipe to losing weight. And wouldn’t you know it: even today he’s still fat and spends most of his nights sitting in his bedroom writing about how other authors are doing it wrong and yet he has never been published outside of anything besides bullshit blogspots and fledgling magazines and random comment boards from all his favorite websites while eating Doritos.