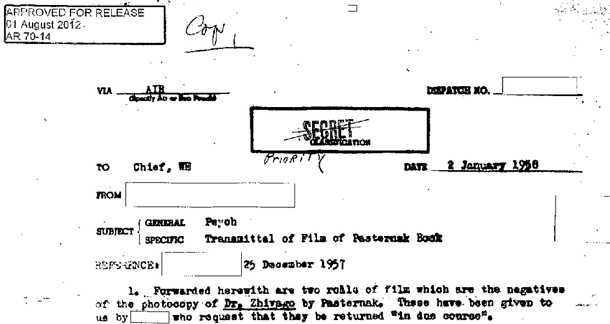 If you've taken a Russian Literature class in the past fifty years, you'll probably remember Boris Pasternak's 1957 novel Doctor Zhivago as that one novel that was incredibly complex, even by Russian novel standards. But, as it seems, during the Cold War, the CIA saw a more exciting use for Pasternak's massive epic: as a tool for fighting Communism.

According to newly declassified documents published by the Washington Post and elaborated upon in an article by the paper, the CIA believed that the book had a "...humanistic message — that every person is entitled to a private life and deserves respect as a human being, irrespective of the extent of his political loyalty or contribution to the state — [that posed] a fundamental challenge to the Soviet ethic of sacrifice of the individual to the Communist system."

While the book was banned in the USSR, the CIA began a shadow campaign to put copies into the hands of influential Russians, Russians who might pass the book along to a friend, who would then pass it along to their friends, and so on and so forth.

Books have been used since the dawn of the printed word to change opinions and shift viewpoints, but few have been involved in direct plots like the CIA employed in the late 50s. As for how well the campaign worked...well, it only took another thirty or so years for the USSR to fall, so I'd say this goes down as a win in Mr. Pasternak's favor.

To be bad the US isnt practicing what they preach now.