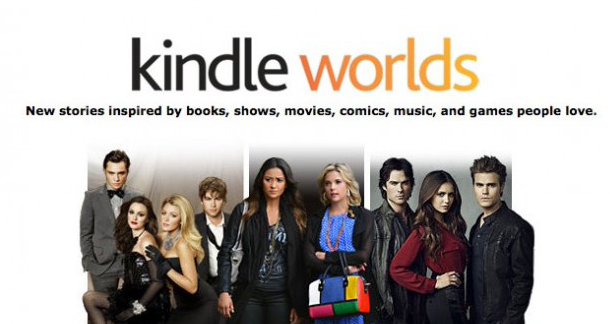 In another move that will undoubtedly upset a few people, Amazon’s come up with a new way to capitalize on content: fan fiction. Fan fiction, also known as ‘fanfic’, is where characters or settings are taken from a book, movie or TV series and given new adventures. These stories are generally written by fans for other fans and hardly ever formally published. (I can remember stacks of photocopied stories at sci-fi conventions back in the 80s, a lot of which seemed to deal with the homo-erotic relationship between Kirk and Spock, but I digress…)

Anyway, Amazon has decided to mine this potentially lucrative vein of unseen fiction and get licenses to use the stories — to some initial excitement as well as scepticism.

"There's probably not an author/fangirl alive who hasn't fantasized about being able to write about her favorite show," budding novelist Trish Milburn enthused on Amazon's website. "The fact that you can earn royalties doing so makes it even better."

Entitled ‘Kindle Worlds’, Amazon have currently licensed three TV series: Pretty Little Liars, The Vampire Diaries and Gossip Girl, from Warner Bros Television Group's Alloy Entertainment, with more licensing deals to be announced in the near future. The model Amazon’s putting in place makes it the publisher, paying “fan-writers between 20 and 35 percent of sales, depending on length”.

This could be a gold mine — apparently Fifty Shades of Grey started out as Twilight fan fiction, so who knows? There may well be another E.L. James out there waiting to be discovered. What do you think? Can the publishing world take another shakeup like this?

Is E.L. James the best example of a successful fanfic author we can find?

I don't have a problem with fan fiction per se. I'm sure it can serve as good practice for aspiring writers. But given that so few success stories seem to come from the realm of fan fiction, the conclusion seems to be that fan fiction writers don't aspire to create anything new, but rather to take direct control of a story they love. It's not creation so much as it is fantasizing.

Which again, I suppose is fine. I'm not going to attack people for choosing to spend their time writing fan fiction. I'm not being any more productive when I sit down to play the Mass Effect trilogy for the third time while making the exact same moral decisions in the playthrough as the last two times.

There's been something like 80+ Fifty Shades of Grey fan-fics that have been picked up by publishing houses for publication. So, it'd make sense why Amazon would want to get in on that action, but I can't see them offering anything other than predatory terms, as each submission would get vetted, and if chosen, the writer loses all rights.

But it has inspired me to see if a Fifty Shades of Grey spitefic could get picked up. Formula being gratuitous sex and lack of subject-verb agreement. Boom, the recipe for success.

Dwayne from Cincinnati, Ohio (suburbs) is reading books that rotate to often to keep this updated May 29, 2013 - 7:54am

Can't you get fanfic for free? Will this be a big thing?