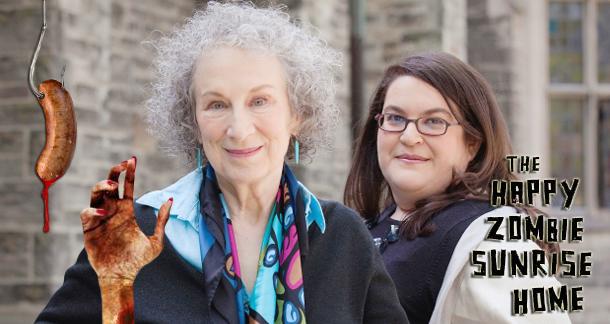 Renowned Canadian author Margaret Atwood and British novelist Naomi Alderman are working together to create The Happy Zombie Sunrise Home, a collaborative piece of fiction that is being published in installments by online writing community Wattpad.

Publishers Weekly reports that the first three chapters have been published, and that additional installments of the story will go live every Wednesday until the project draws to a close in January. The tale focuses on a teenager’s struggle to survive in post-apocalyptic New York after her mother becomes one of the living dead and eats her father.

“For me it was pretty daunting to know that my words would be sitting next to those of my personal writing hero!” said Alderman. “But once I managed to swallow that - like a zombie chewing on delicious brains - it became gleefully joyful to think of some interesting challenges.”

Atwood rose to fame following the publication of her 1985 novel, The Handmaid’s Tale, which was awarded the inaugural Arthur C. Clarke Award in 1987. Alderman won the 2006 Orange Award for New Writers for her debut novel, Disobedience.

While The Happy Zombie Sunrise Home is a great example of how technology can bring writers together to create new work, do we really need another story about zombies?

Joshua Chaplinsky from New York is reading a lot more during the quarantine October 25, 2012 - 9:16am

JEFFREY GRANT BARR from Central OR is reading Nothing but fucking Shakespeare, for the rest of my life October 25, 2012 - 4:02pm

Serial fiction has been all over lately. Don't forget to read my ongoing serial dark fantasy YA novel Madrigal, at JukePopSerials.com.

I wonder if Atwood is perhaps too genteel to pull off a zombie novel? Maybe that's why the hired help? Too bad Wattpad is such a... Anyway, c'mon Litreactor! Let's start a massive serial collaborative novel right here!