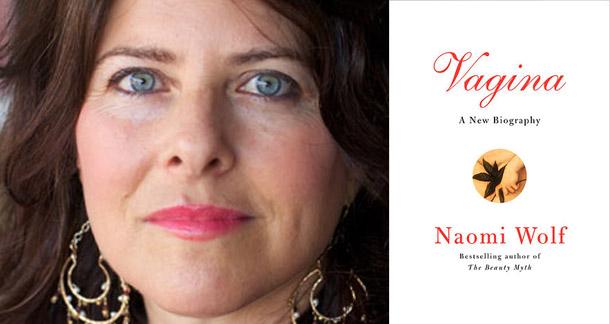 Apple is afraid of the word vagina, it seems. Naomi Wolf's latest book, Vagina: A New Biography, was listed as V****a in iTunes. I double-checked the calendar, because for a second I thought it was 1952, but nope, it's not. Welcome to 2012, everyone!

The company has gotten beat up for censorship policies in the past. Check out what DailyFinance wrote in 2010:

When the Wi-Fi-equipped version of the iPad went on sale two and a half months ago, Apple demanded European magazines cover up scantily clad models for the app editions and cracked down on dictionary applications containing 'objectionable' words. They rejected a Pulitzer Prize-winning editorial cartoonist, only to rescind the rejection once the media got wind of it.

Earlier this week, Facebook suspended the account for the New Yorker over some crudely-drawn nipples in a cartoon depicting Adam and Eve. You can see it here at CNET, and I'm not even going to put a NSFW stamp on it, because c'mon.

What do you think? Is vagina too racy a word for the general public?

BlueOctopuss3 from Puerto Rico (U.S. Territory) / living in MIami, Florida is reading The Shadow of the Wind by Carlos Ruiz Zafon September 14, 2012 - 2:07pm

What decade is this? No really. Did we just enter a wormhole which warped us back to the 50's?

What the hell, man? They're just words.

I love Apple, they have great products, I enjoy Facebook, but, man...what the hell?

Cool. At least they got back to their senses.

I looked it up and it's not censored. There are several listing for various books and songs with "vagina" in the title as well as "penis"

Class Director
Rob from New York City is reading at a fast enough pace it would be cumbersome to update this September 14, 2012 - 2:47pm

Yup. That's why I said in the article that it wasn't censored anymore.

Dino Parenti from Los Angeles is reading Everything He Gets His Hands On September 14, 2012 - 3:45pm

If the word's good enough for doctors and medical textbooks to say, how could it possibly be too racy? Did they asterisk the hell out of the marquees showing the Vagina Monologues? I'm tired to the point of boredom appeasing to the minority of uptights who can't handle seeing the title on the book of a word that probably appears a hundred times--if not more "vulgar" iterations--within the book they're about to download anyway. Thankfully they grew a pair and evolved.

You can't say vagina. That's the dirty place ladies have. Hahahahahahaha! I have friends, women, who hate the word vagina too. If I say it, they freak out. I'm like "You have one!" The other words are usually off limits with those women too. It's their "down there" area. Even scarier, most of them have children and are married.

Censorship is lame. I'd like to see media censorship gone in a few years. If it's a concern for children seeing it on TV, air the adult content after 8 or 9 pm or let their parents use the parental blocks or, you know, actually monitor what their kids watch.

edsikov from New York by way of Natrona Hts PA is reading absolutely nothing September 15, 2012 - 8:18am

I just wanted to say I love vagina. I think padding the title of your book with archaic Latin and Greek words is kinda pretentious, but I support her right to do so.

Good, because I was hoping to publish my book, Miniscus, for the iBook store... so I am relieved medical terminology for body parts is no longer censored.

It's silly that they'd censor it, but it's obvious that the title was chosen to be jarring. You can't deny that people don't notice word choice like that. So it's not like the title was innocently chosen, or that this should come as a surprise to anyone.

Also, this is probably the best publicity this book could ask for. Who heard of it before the controversy surrounding its censorship? Wolf should be thanking them for the reach they've generated by causing such a mess around it.

I know this thread is about censorship surrounding words that do not require censoring, but I would like to go on record as saying that the only good thing about this book is the controversy surrounding its title.