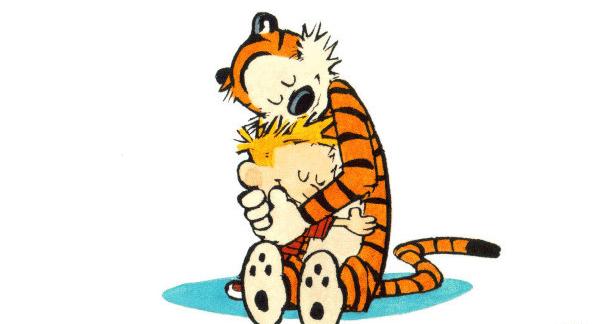 Some kids grow up reading Batman comics, or Spiderman, or perhaps Love Hina if your parents didn't see you duck into that hidden corner of the bookstore.

My comic of choice was Calvin and Hobbes, which may explain why I grew up to be a sarcastic, opinionated idealist with more imaginary friends than real ones, and not a superhero like most people.

Apparently, I wasn't the only fan. Calvin was a hero to many who grew up around my generation, and the comic was hugely popular over its decade-long run. The artist, Bill Watterson, has since retired and remained pretty quiet, despite our nearly insane pleas for him to return to the strip, but the story of the boy and his stuffed tiger still holds a fiercely loyal audience.

Some members of this audience recently completed a marvelously successful Kickstarter campaign to fund a documentary about the strip and its impact on comics, the audience, and our society as a whole. It's called Dear Mr. Watterson, and it managed to raise over twice the goal of $12,000 dollars. It'll be hitting theaters and video-on-demand on November 15th, 2013.

From the documentary's site:

It has now been more than a decade since the end of the Calvin & Hobbes era. Bill Watterson has kept an extremely low profile during this time, living a very private life outside of Cleveland, Ohio. Despite his quiet lifestyle, Mr. Watterson is remembered and appreciated daily by fans who still enjoy his amazing collection of work … This film is not a quest to find Bill Watterson, or to invade his privacy. It is an exploration to discover why his ‘simple’ comic strip made such an impact on so many readers in the 80s and 90s, and why it still means so much to us today.

I'm not a big re-reader, but I own every single Calvin and Hobbes book in existence (which makes for a very heavy moving box, by the way), and I pull them out every couple of years to enjoy in their entirety. They're simply incredible, and I'll definitely be seeing this at the end of the year. How about you?

I got goosebumps and a little teary-eyed just seeing the title of this.  I have no idea why, but Calvin and Hobbes go right to my soul.  I'm excited about this.

Awe, Calvin and Hobbes! This made me very happy. The documentary looks like it will definitely be worth a watch.

Calvin and Hobbes is simply ever-great. I mean that. I can get misty just thinking about those two and their ratty, wonderful antics.

No other comic strip evokes similarly intense feelings in me. Not even Peanuts.