Comic Book Series 'Preacher' May Be Headed To AMC 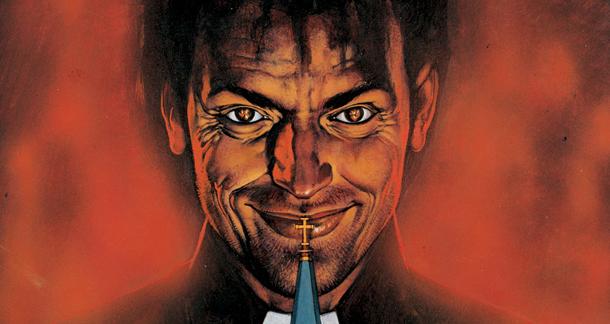 Finally, finally, the Veritgo comic book series Preacher could be getting a screen adaptation. This is good news if you enjoy things that are awesome.

According to Devin Faraci at Badass Digest, AMC is taking the 75-issue series to pilot. This is after a lot of failed attempts to turn the series into a film or a movie. While it's not a series order, it's still a positive step forward. After Faraci broke the news, Seth Rogen indicated on Twitter that he was involved with the project.

Looks like about seven of years of hard work are about to pay off. I may get to bring one of my favourite stories ever to life.

In Preacher, written by Garth Ennis, God has abandoned Heaven, and Jesse Custer wants to bring him to justice. Custer, the titular preacher, is possessed by Genesis, the offspring of an angel and a demon that gives him the power to force people to do whatever he says. He's accompanied on his quest by his sharp-shooter girlfriend, Tulip, and an Irish vampire, Cassidy. They cross paths with an assortment of evil and grotesque characters, including the Saint of Killers, the inbred scion of Jesus, and Arseface, a kid who tried—and failed—to emulate Kurt Cobain. Oh, and also Jesse is helped along by the ghost of John Wayne.

So, yes, the series is dark and profane and violent and just generally batshit. It's also a fantastic exploration of themes like Americana and justice and religion. This has “cable series” written all over it. The Walking Dead may be a crappy show, but at least AMC doesn't shy away from violence, so this could prove to be the right home. And I'm on board with Seth Rogen's involvement. There's a lot of dark humor in Preacher, and he could be the guy to bring that out.

Let’s fan-cast this thing! I think Irish actor Andrew Scott (Moriarty from the BBC’s Sherlock) should play Cassidy. And maybe Michael Shannon as the Saint of Killers? Because there's not a human being on this earth more intimidating than Michael Shannon.

The big question is, who do you think should play Jesse Custer?

I used to think Tim Roth for Cassidy, but these days I'd love to see Paddy Considine.

Sam Elliott would be perfect for the Saint of Killers

Joshua Chaplinsky from New York is reading a lot more during the quarantine November 18, 2013 - 11:50am

Yes, Olyphant as... anybody.

And Scott Haze, who played Lester Ballard in Child of God. Dude's a powerhouse and definitely has the look.

Class Director
Rob from New York City is reading at a fast enough pace it would be cumbersome to update this November 18, 2013 - 12:02pm

I didn't even think about Sam Elliott. I want to change my answer.

Sam Elliott as the Saint of Killers.

Olyphant is busy with Justified. Elijah Wood should play Arseface.

Preacher isn't really mature story telling. It swears a lot and there is lots of violence and gore. There isn't really the talky hidy high concepts. I think the backlash for this could gain more ground than the others did.