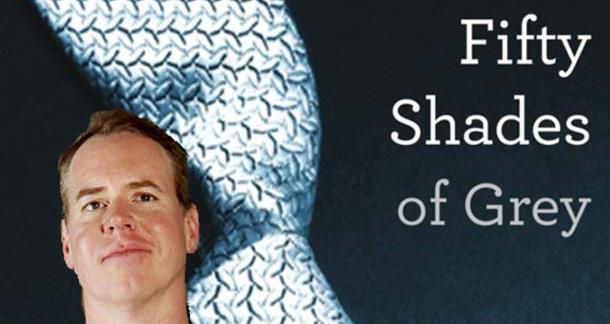 A few weeks back I made a pledge: No more writing about Fifty Shades of Grey. I'm tired of hearing about it. Then this happened, and I had to break my vow: Bret Easton Ellis is making a push to write the movie adaptation (the rights were won by Universal Pictures and Focus Features). Ellis has been tweeting about it, and insists that he has his agent on the case.

He also wants David Cronenberg to direct. And he wants Alexander Skarsgård for the role of Christian and Lena Dunham for the role of Anastasia. He has some other ideas about casting, which you can read here.

So. There's no chance this is going to happen. The studios will deem Ellis too extreme and balk, and the chances of lining up Cronenberg, I mean, c'mon.

But. If the stars were to align and this were to happen? I would see this movie. I don't think I would have a choice. How could you not see this movie?

You couldn't. Not an option.

I'd see about anything with Cronenberg at the helm, and the rest is icing.

Joshua Chaplinsky from New York is reading a lot more during the quarantine June 12, 2012 - 6:23am

I'd be there in a heartbeat.

Juice Ica from Rhode Island is reading The Twelve by Justin Cronin & Beautiful Creatures June 12, 2012 - 6:26am

I have no interest in these books but even I would jump at the chance to see this!

taralara from Minneapolis is reading We Need New Names by NoViolet Bulawayo June 12, 2012 - 6:35am

Dude's the most hyperbolic tweeter I've ever seen, so most of them just get a cry-wolf shrug from me. It's always, "THE most important film of the decade is _____" or "THE most perfect slice of pop-music perfection is ______" (changing weekly, of course, per his tastemaking consumption) and suddenly I'm hearing Pat Bateman quoting from Zagat listings and Playboy album reviews all over again.

This has nothing to do with his 50SoG adaptation, just had to say it.

Yeah, I really think he is just messing with people.

This is making me laugh, and quietly hope, deep inside, that he is serious and he can force it to happen.

What?  Blasphemy.  What about The Secretary?

What about The Secretary?

I forgot about Secretary. I saw it without any idea what it was about. Not great, but it was a kinda funny. I don't need to ever see it again, though.

Six of one, half a dozen of another I guess: Trashy novel about a 'risqué' subject equals mass appeal, which generates larger acceptance of marginalized lifestyles; trashy novel becomes artful film written / directed by masters of their craft, but no one outside the fringes actually sees it.

Jane Wiseman from living outside of Albuquerque/in Minneapolis is reading Look to Windward by Iain M. Banks June 12, 2012 - 11:38am

I love The Secretary! But really--I think Ellis is a fine writer. Why would he want to associate himself with the worst writing of this or any other decade? Gag me.

I really can't see how anyone can think this is more than a joke. I guess I could be wrong, but it seems pretty obvious the guy likes to stir the pot.

God, but I wish it were real. David Cronenberg+BDSM!

Cronenberg already made a movie about kinky sex, it's called Crash. This seems quite tame in comparison.

Maybe if this were to be a combo of the titular textual buttsplooge and American Psycho. That might get me. So like, start with boring (boring) sex that's supposed to be kinky, then lead that into Christian chasing Anastasia down a hallway with a chainsaw.

If the story isn't already a twisted joke, Ellis' adaptation totally would be. Which only leaves me wondering, why the hell didn't he offer to write the screenplay for Twilight? I would have enjoyed that.