Bret Easton Ellis has Written a Movie for Kanye West 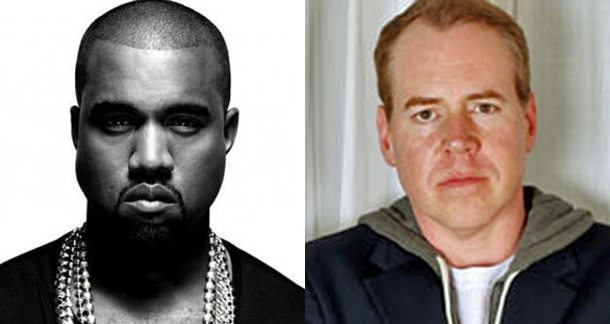 In a recent interview with Vice, American Psycho and Less Than Zero author Bret Easton Ellis revealed that he's writing a film for Kanye West. Not much is known about the film at this time, but it was actually West who approached Ellis to collaborate on the film. In the interview, Ellis said:

I didn’t want to at first. Then I listened to [West's latest album] Yeezus. It was early summer last year and I was driving in my car. He’d given me an advance copy, and I thought, regardless of whether I’m right for this project, I want to work with whoever made this. So fuck it, I said yes. And that’s how it happened. That was seven or eight months ago. We’ll see what happens.

I really like him as a person. I know he comes off in this performance-art way in the press, but if you’re just alone with him in a room talking for three hours, it’s kind of mind-blowing.

Upon inspection of each artist's work, the collaboration makes sense. Both West and Ellis appear to be obsessed with the price of fame, the darker side of life, and embracing your inner demons. To many, both men also come off as supreme narcissists, and it's questionable whether the clash of such outlandish personalities will produce a masterpiece or a muddled mess of conflicting egos. West did appear on Ellis' podcast, though, so it's clear they don't mind spending at least some time with each other now and then.

Good or bad, it'll be a while before we see the result. Ellis said that the project is currently in "Kanye Land, and that's subject to a whole other time frame".

Joshua Chaplinsky from New York is reading a lot more during the quarantine February 19, 2014 - 11:47am

Ugh. I wonder if Kanye is going to continue to rip off Jodorowsky with this.

You wish you were ripping off Jodorowsky, Josh.

Joshua Chaplinsky from New York is reading a lot more during the quarantine February 20, 2014 - 8:02am