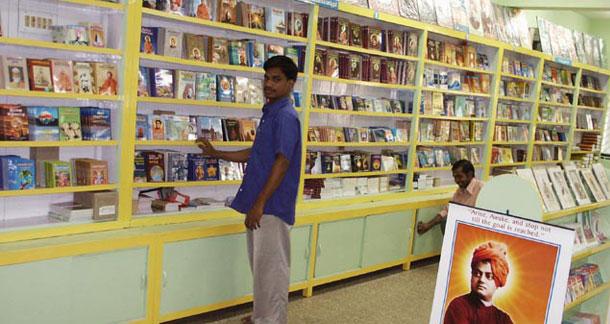 If you're not familiar with the term, here's an example how "showrooming" works.

I was browsing around Best Buy the other day and came across Heroes (season 4), and even though I told my girlfriend, "It's better than season 2, but not even close to seasons 1 or 3," she insisted on wanting to see it anyway because she's got a secret crush on Hiro Nakamura.  So I'm almost ready to fork over $14.99 (plus tax) when my thrifty side stops me.  I pull out my phone, hop on Amazon, and come to find that I can get the same thing for $11.99 (new; comes with Super Shipper discount) and since I need to buy some other stuff anyway, I decided to pass for the time being.  Ultimately, I left with nothing other than a redirected sense of consumerism.

That's basically what showrooming is: using the retail side to accumulate ideas for purchases, but giving your business to the cheaper alternative.

Now do I owe Best Buy my business simply because they reminded me of this particular gift idea?  Or am I simply being a price-conscious consumer?

This is essentially the debate bookstores are having right now, namely the independent ones where every sale matters.  Unlike at Best Buy, showrooming is an extremely frowned upon practice that drastically affects their bottom line.  When done in excess, it could be the proverbial last straw that brings down their business.

According to a survey conducted in October by the Codex Group, 24% of people who said they had bought books from an online retailer in the last month also said they had seen the book in a brick-and-mortar bookstore first.  To extrapolate: one out of four people that walk into an independent take their business elsewhere.  Bookstore owners are frustrated by this, saying that customers are taking advantage of their careful selection, staff recommendations, and warm atmosphere.

So is it a question of ethics or obligation?

Obviously, the author in me wants you to support your local bookstore--no question.  However, I can't fault anyone for wanting to save a buck when it's obvious the same product can be bought for less on Amazon compared to the retail point of sale.  So to you, the reader, we pose this question: does your wallet or your loyalty weigh more in your decision-making process?

Class Director
Rob from New York City is reading at a fast enough pace it would be cumbersome to update this December 5, 2011 - 10:44am

I'm not going to argue against free market economy, but I do believe it's really shitty to go into an indie bookstore, take photos or make lists of books with the intention to buy them on Amazon, and then leave without buying anything.

Unless I can get the item I'm purchasing for liked ten dollars cheaper or more I tend to buy in store. Five dollars cheaper is pretty negligible since I don't have to play the "waiting on a package" game.

NotMarilyn from Twin Cities, MN is reading Mistress of Rome by Kate Quinn December 5, 2011 - 10:51am

I don't usually hit amazon unless there's a book I want that I can't get in a bookstore, which seems to be happening more and more often. While my wallet loves the idea of getting a cheap book (I bought one for 4 cents yesterday), my psyche loves the bookstore experience more. So, I give them the first shot. If they don't have it, then I don't feel badly about saving the money elsewhere.

Joshua Chaplinsky from New York is reading a lot more during the quarantine December 5, 2011 - 10:55am

No season of Heroes is worth any amount of money.

And yeah, don't showroom at an indie.

I'm pretty much in line with NotMarilyn. I recently ordered some from Amazon that I would have to special-order at a store anyway. And I ordered used copies, so I guess I'm generally frugal / cheap.

EDIT - just realized that because I bought used, even though it's through Amazon, most of the sale price will go to the indie bookseller (I think)

I like to think that the idea of buying in a 'brick and mortar' store is built in to the price of the book. I also like having the item 'right now' instead of waiting on shipping. If I took the time to visit a store, I have already decided I may be leaving with a product.

I remember when music stores used to complain about hearing people say, "Don't buy that, I already have it. I'll burn you a copy."

Loyalty or a guilty conscious didn't ultimately save music stores, why would it be different for book stores?

I love book stores and I loved music stores even more, but the truth is I love saving money more than both.

I check online while at the store, and if there is more than an $8 difference between what Amazon is offering and what B&N is offering, I go for Amazon. This isn't always the case: there are some books and films I like to "hunt." It's easy to find things online, but nothing beats finding an out-of-print goody in a store.

Honestly, if I could buy B&N titles for my Kindle while in the store, I'd do it. I check the price of films at my local video shops before I resort to Amazon. I only purchase video games in store and in person. But when it comes to books and box sets, I can't help but feel a little stupid for paying store prices when Amazon has the same items heavily discounted.

I think everyone has their own personal threshold as to how much they'll pay over the Amazon price before they feel ripped off.

If I'm browsing an independant bookseller I always buy something and NEVER price shop Amazon....I know Amazon will likely be cheaper.  I'm willing to pay for the instant gratification, ambiance, service, live help, and exchange w/ a fellow book lover that Amazon is unable to offer.

However, I don't use that same consideration w/ a big box store.  Barnes and Noble, Books a Million, etc have put a TON of independant bookshops out of business because of their ability to advertise, undercut, etc.  I fully expect them to compete w/ Amazon.  If Amazon wins then so be it.

Dwayne from Cincinnati, Ohio (suburbs) is reading books that rotate to often to keep this updated December 5, 2011 - 2:05pm

I'm okay with it honestly. Most of them have no remorse over taking $5.50 out of my pocket for $0.03 of coffee so whatever. I will buy the product if the price difference is less the a dollar or two.

An Ode To Half Price Books

I am so surprised that no one has mentioned Half Price Books. I am a bookseller at Half Price Books in Texas. If you do not know about this company I highly suggest you look them up they are basically an old family run hippie based company. The store I work at donates on average around 120 of boxes per a week. This goes to a warehouse in Dallas where teachers can go every Saturday and pick out what they want.

Our clearance racks are amazing and since we see so much product come through we clearance really good stuff. I sound like an advertisement. But I just truly love my job. Everyone who works there is either a book lover, music lover, comic lover, movie lover or record fan. We all love what we do as we have a great discount. Our sales revenue is very high we are constantly busy. People always tell us that they would prefer to shop with us compared to B&N's or Amazon.

We also have our website HPB.com where we sell books to. And our stores deliver. I will never shop online for as long as there are book stores like HPB.

Joshua Chaplinsky from New York is reading a lot more during the quarantine December 5, 2011 - 4:19pm

I've definitely seen their praises sung around these parts.

R.Moon from The City of Champions is reading The Last Thing He Wanted by Joan Didion; Story Structure Architect by Victoria Lynn Schimdt PH.D; Creating Characters by the editors of Writer's Digest December 5, 2011 - 7:11pm

I've gone to brick and mortars, found a book I wanted, looked it up on amazon and after taxes and shipping, the price was almost the same. Now, this was a used bookstore, so not your Books-a-million or Barnes and Noble. Generally, I buy used, unless the book is new. And, since I have zero patience, I'll usually buy from the store anyway. If amazon can save me five to ??? dollars, cool, I'll order it. But, if it's only a buck or two, I'll buy in store. Pittsburgh's independent stores are very limited and I live five minutes from a Half Price Books and Barnes and Noble. If, however, I do go the independent store, I will buy something. I make sure of that.

Dwayne from Cincinnati, Ohio (suburbs) is reading books that rotate to often to keep this updated December 5, 2011 - 8:32pm

Half Price Books is great, love that store. One of the used stores that seems orgnaized.

Stores should be matching Amazon's discounts if they can afford it.

SGJ from Midland, Texas (but in Boulder, Colorado, now) is reading weird fiction and horror fiction and science fiction and literary fiction and innovative fiction, or maybe a romance or a western or a magazine on bowhunting or show trucks or anthropology December 6, 2011 - 7:16pm

Joshua Chaplinsky from New York is reading a lot more during the quarantine December 6, 2011 - 8:55pm

Thanks, Stephen. We have an update on that ready to go, it just didn't make the late edition. Kinda crazy.