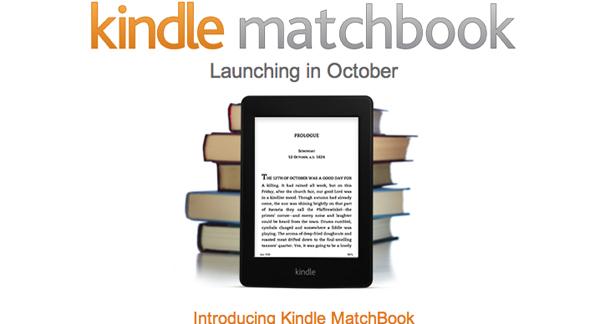 UPDATE: As of today, October 29th, Kindle Matchbook is up and running. All you have to do is sign in to your Amazon account to find the titles available to you. Hopefully they'll be adding more soon, because after 18 years of Amazon ordering, you know how many are available to me? A big, fat ONE, and it was a color photo book I bought someone else as a gift, so me and my Paperwhite are out of luck :(

Amazon announced a new service yesterday called Kindle Matchbook, which will offer free or discounted eBooks with the purchase of physical books. The service will officially launch next month. Though some indie publishers have experimented with including eBook downloads with the purchase of a hard- or paperback, Amazon represents the first major player in the publishing industry to make such a move.

Now, mind you, this doesn't cover all book purchases, as Amazon has partnered with only a select few, unnamed publishers. That being said, some 10,000 titles will be available in October, including works from Ray Bradbury, Michael Crichton, Jodi Picoult, Neil Gaiman and Neal Stephenson, amongst others. Furthermore, the program is retroactive, meaning if you've ever bought an eligible title, you'll automatically receive the free or discounted book. Also, if the eBook isn't free, the most you'll pay for it is $2.99.

Neat, huh? Well, if you're an indie bookstore, this news probably isn't so neat, as it's sure to drive more business over to the "enemy." But hey, if music stores can survive the digital revolution, bookstores can too, I'm sure of it.

Speaking of Amazon unveiling new features, the company is finally doing something with that GoodReads purchase they made back in March. GalleyCat reports that the new and improved Paperwhite features direct integration with the book lovers' social network, allowing users to rate books and share quotes straight from the device (rather than, say, copying it down on your smartphone). They've also spruced up the device itself, with upgraded screen technology and new educational features like vocabulary flash cards and reading goals for adolescents. Read all about the shiny stuff here.

So what do you think? Even if you're a staunch supporter of your local bookstore (you should be), you have to admit, Matchbook is pretty sweet, and the bells and whistles added to the Paperwhite are slick too.

Where To Buy Cheap eBooks

I made all three of my own books available free on Kindle through this program the day it was announced. Been asking for this feature for a long time, and it was the impetus for my choice of Kindle over Nook way back in the day, given my extensive Amazon purchase history and hope that someday they'd offer this.