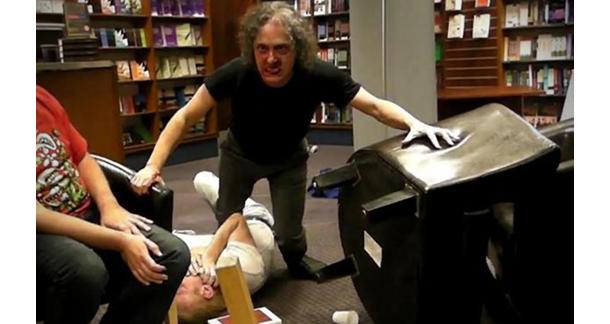 In perhaps one of the strangest (and most entertaining) promotional events in recent memory, Joseph D'Lacey, author of the zombie-esque new novel Blood Fugue, was "killed" and "eaten" by fellow horror writer turned undead fiend Jasper Bark, during a reading at London bookstore Blackwell's.

D'Lacey's publisher Salt posted a tongue-in-cheek press release announcing the author's demise, including a fantastic video of the incident. Here's a little taste of the gory cheer:

It was reported, 'A member of the audience began rocking back and forth during the launch reading and as the author completed his performance the customer collapsed, convulsing, appeared to convert into a rabid zombie and then proceeded to demolish the event as he struggled with D’Lacey.' Sadly, D’Lacey was overcome and was eaten by none other than Jasper Bark. A considerable about of blood fudge was also consumed during the event.

While he may be the first to do so in a comical, self-promotional manner, D'Lacey's not the only writer to fake his own death. Ken Kesey, who wrote One Flew Over The Cuckoo's Nest, allegedly staged an elaborate suicide in order to evade prosecution for marijuana possession.

Who thinks this is a fun way to promote a novel about zombies? Too gimmicky? Any other famous author faked deaths?