Amazon Is Getting Into The Book-Lending Business 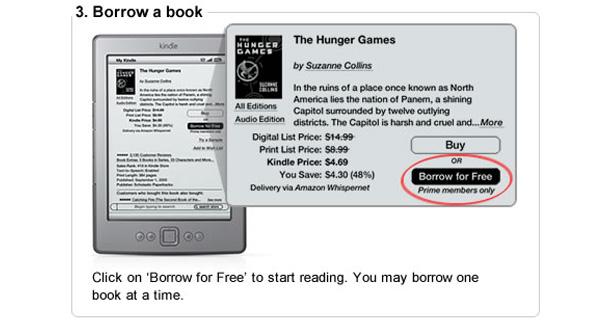 Amazon isn't content to just shut down bookstores--now they're going after libraries.

Not really, although they did just announced the Kindle Owners’ Lending Library, which allows Amazon Prime members to rent up to one digital book per month with no due date.

It comes with a couple of caveats. When you download an eBook, you can only read it on Kindle devices, so iPad users can't rent books through the Kindle app. You can only rent one book at a time--when you rent another book, the first one disappears (though notes and highlighting are saved, if you decide to buy it or rent it again).

Oh, yea, and none of the big six publishing houses are participating, so there's only about 5,000 books available to rent.

The Big Six aren't climbing on board for the same reason that Netflix never has any good streaming movies; they're afraid it'll cut into their bottom line. Why buy a book, especially one you don't plan on reading again, if you can rent it?

But even without the Big Six, the selection isn't too bad. A cursory look at the site shows off The God Delusion by Richard Dawkins, Water for Elephants by Sara Gruen and The Hunger Games trilogy by Suzanne Collins. I would be interested in reading at least one of those books!

While not perfect, it's great news for Prime members, and a pretty good argument in favor of the $79-a-year service. On top of the lending library, Prime members have access to unlimited two-day shipping and a flat rate of $4 for one-day shipping, as well as streaming movies and television shows (although their selection is worse than Netflix).

Still, that's a lot of entertainment for $79 in a calendar year, even if you don't get access to all the latest and greatest books and movies.

What say you? Is this going to inspire anyone to sign up for Amazon Prime?

It does not sound like a terrible idea. I have been a prime member for a few years, but I will probably forget about this service. I have friends that are librarians and I enjoy a good ole fashion library and independent book stores as well.

amongthegoblins from North Carolina is reading Among Others, The Three Musketeers, Bindoff's Tudor England, and Les Sortceliers November 4, 2011 - 11:41am

The library has a much better selection and less chance of technical difficulty. If the Amazon service became equivalent to a library, though, I'd probably use it. (I got my Kindle when I was living overseas and HAD no English-language library to go to. At that point, I would probably have thought this was a good deal. So I'm sure there are some people who are going to use it.)