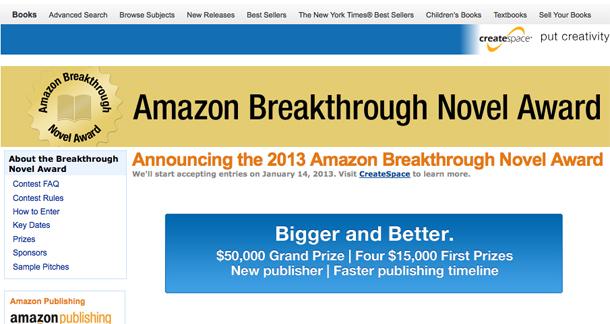 Earlier this month, Amazon announced the rules and prizes for its sixth annual Breakthrough Novel Award Contest. This time around, some things have changed. First, and most unsurprising, the online retail giant dropped Penguin as their publisher and distributor, opting instead to handle everything in-house through Amazon Publishing. Second, entrants will now choose between five genres to classify their submission. They are as follows:

There will be one Grand Prize winner in each category. Each winner will receive a $50,000 advance and a full Amazon Publishing Contract. Note that the royalties are preconfigured and the contract is non-negotiable. Four First Prize winners get the same contract, but they only receive a $15,000 advance. Second and Third Prize honors will be awarded, though winners won't receive any tangible spoils. Check out the full breakdown of prizes here.

The submission period begins on January 14 and lasts until January 27, or until Amazon has received 10,000 entries, so if you're interested, act fast. If maximum capacity is reached, the doors will close until next year. Submissions are managed through CreateSpace, so you'll need to sign up for a free account there.

All entries go through a vetting process, in which Amazon Expert Readers and reviewers from Publisher's Weekly critique manuscripts and offer feedback to authors. Oddly enough, though, the winners are ultimately decided by Amazon customers, who will read excerpts from the polished texts and vote on their favorites. No word on whether these are specifically selected customers or it's just a free-for-all.

Be sure to read the Official Rules before entering. Also, a list of past winners in print can be viewed here.

Who here thinks they have what it takes? Or are the rules and regulations unsatisfactory, even for up-and-coming, unpublished authors? Anybody familiar with the past winners' work?

Someone should write a Horror/Sci-fi novel in which Amazon successfully takes over the internet, renaming it The Amazonet. *Shudders*

(Edited to add: The full contract, not the deal memo on their site")

This sort of makes me nervous.  I don't think I'll be entering it. And no, I'm not familiar with any of the authors listed.

You can refuse to sign the contract once you get to the semi-finalist stage, essentially withdrawing from the contest.

I also should mention that there's a pretty good group of supportive writers on the abna discussion boards.  There are people there with varying levels of experience who can help with pitch/genre/excerpt decisions.