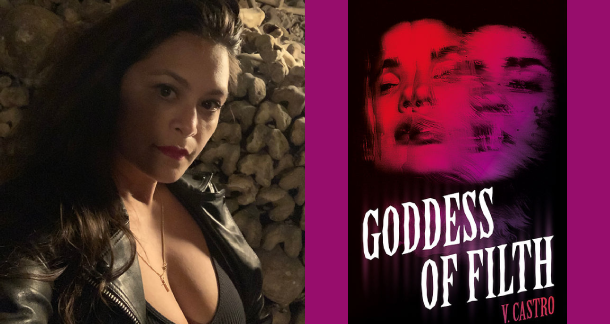 Horror-author V. Castro lives in London, yet she maintains strong roots embedded in Latinx culture through stylish, terrifying prose soaked in the blood of ancestral myths. Often her stories are a kind of Pandora's box, reintroducing these spirits into modern settings to unbeknownst victims, who have just as much to learn as they do fear if they live long enough to tell the tale. Her newest book, Goddess of Filth (Creature Publishing), takes a group of teenage girls through coming-of-age initiations that are both supernatural and all too real, questioning taboos while revealing the lecherous hypocrisy of organized religion.

The 90s femme-horror film The Craft is mentioned numerous times in Goddess of Filth. Do you see your book as a sort of Chicana retelling of that story or is it merely a reference to Fernanda and her bruja crew’s cinematic tastes, since your book takes place in the 90s as well?

It's more of just a nod to The Craft because I want to incorporate more narratives I grew up with into the experience of being a woman of color. I had no choice but to consume mostly white media. Today, there are more (although not enough) opportunities to see ourselves represented. That is also why it is a story about possession, however, in a way I feel it would happen outside the usual possession trope. This also goes for my book Hairspray and Switchblades. Why write about werewolves when my ancestors revered jaguars?

We each have different histories and stories that create this rich experience. How exciting for everyone if this is shared.

I’ve always been fascinated by women’s synching of body cycles and the natural gravitation to sing in perfect pitch “blood harmonies.” Seances aside, do you see an inherent magic at work when a group of women gather with set intentions?

Women are powerful when they work together. We have been pitted against each other for so long, and that is really unfortunate because this only benefits institutions and ideas entrenched in patriarchy.

You have knack for incorporating traditional Latinx myths, monsters, saints, and urban legends into your work — like the Cucuy in your “Cucuy of Cancun” (of last year’s Worst Laid Plans anthology) to the Tlazolteotl in Goddess of Filth. What drew you into using these myths as a medium?

We need greater representation. Our culture and identities are worthy. We are worthy and I love my history and culture. When I began writing it was not a real intention either. It just flowed from me naturally. It came from somewhere I can’t explain, but now there is no turning back.

My feral parents used to attend Kali-worshipping ceremonies, where groups of new-age boomers would gather around huge bonfires, intentions set on throwing their negativities into the flame so the goddess Kali could absorb it all in empowering martyrdom. But Kali is also an intimidating figure; images depict her having four arms, wearing a necklace of human skulls, one foot conquering a male dead on the ground — she’s often called The Goddess of Death and Creation. Do you see Tlazolteotl as a similar deity, though one is Hindu and the other is Aztec? Are we really all just worshipping the same universal Gods, no matter our culture?

Tlazolteotl is a sin eater, but if any Aztec goddess would be similar to Kali I would say she is closer to Mictecacihuatl, the Aztec goddess of death. She's one of the stars in my upcoming Queen of The Cicadas, out June 2021 on Flame Tree Press.

I think as humans our souls all hunger for the same things. We have a common vision and desire which might explain why we have created stories that have the same deities. Deep down we are the same. We all bleed red and fear death.

You intertwine a lot of effective erotica into your prose, which can be a challenge for a lesser writer to get “right.” How do you approach this element to your stories? When does erotica miss the mark? How do you see it differ from male/female perspectives? 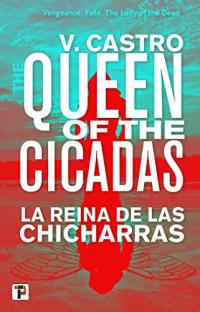 I don’t set out to incorporate erotica into my stories. If I see it as I write or before I write, then it goes in. Sex and sexuality are natural. They are part of our existence we can’t escape. You don’t set out to fall in love with someone. It happens.

Erotica can miss the mark when it is degrading to anyone. Sex should be consensual and be a great joy for all involved. Like real sex, the best erotica just flows. It has its own mystical rhythm.

Women write sex differently because our bodies operate differently than men. We are also shamed more when it comes to sex by both men and women. And this can rob us of joy. This is one reason I feel erotica is an important part of literature. Take the stigma placed on female sexuality away.

The girls in Goddess of Filth are fresh out of high school, yet I wouldn’t see this as YA due to a lot of the more mature subject matter it contains. Would it be ethical as a genre-transition book to prepare a young adult for these heavier themes?

I don’t think so. There is nothing that can prepare people for the heaviness life can bring. We often have no clue where life will take us. I think it’s better to just show up for each other in love and understanding no matter what our age. I hope older generations would read this and perhaps open their hearts a little more.

You and Cynthia Pelayo just edited and released the Latinx Screams anthology (Burial Day Books). Since you’ve compiled the current definitive book of Latinx Horror, what do you see as unique to the culture’s approach to the genre?

The book has authors from all Latinx communities. The purpose is to be seen and heard. To give readers the opportunity to understand each other more. You don’t realize how important representation is until you are deprived of seeing yourself reflected.

We each have different histories and stories that create this rich experience. How exciting for everyone if this is shared. Changing the way the world operates can be fun. Minds and hearts can change with one word or a story if given the chance.

Get Goddess of Filth at Bookshop or Amazon

LURID: Boss Prophets - the Cult Narrative in Fact and Fiction

Garth Miro: Burning Down The Idol of Vacations