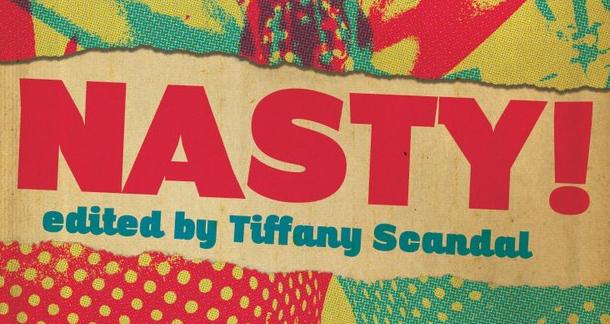 From body positivity to sexual empowerment to overcoming adversity and beyond, Nasty! is a collection of bold essays and recollections from King Shot Press, written by fierce women who are not ashamed of who they are or what they do.

And it kicks ass.

I've got it on pre-order, but I convinced the editor, Tiffany Scandal, to send me an advanced copy so I could prep for this interview, figuring I'd skim a few of the pieces, just to get a feel for it. And I ended up reading the whole thing in one sitting. It runs a wide emotional gamut, but every essay is united by a really intense sense of honesty—with an undercurrent of righteous anger.

Give it to your moms and daughters. Give it to your asshole uncle who makes jokes about women making sandwiches. Throw copies at Trump's dumb fuckin' head. With the proceeds going to Planned Parenthood, ordering multiple copies is just the right thing to do...

I thought about opening this with: 'What inspired you to put together this anthology' and then I was like, 'Wow that's a silly question.' But that made me think, you know, Trump is the worst thing to happen to America in a very long time, but he seems to have ushered in a new age of engagement and enlightenment. Like the human body fighting a virus. So, apart from the title, do you think this anthology could have existed without him?

I think so. Most of the essays contained in this anthology revolve around conversations that women have been trying to have for years. The only difference between this coming out now versus before the election, is that I think more people are ready to listen.

I am not a fan of Trump and I experienced a fair amount of trauma with this last election. I felt betrayed by the country I live in as a sexual assault survivor. And while I wasn’t a huge fan of Hillary, she was at least qualified, infinitely more professional, and a completely capable leader. Seeing her lose made me feel like this country hates women so much, they'd rather elect an unqualified celebrity who grabs women by the pussy and is still trying to cover up charges of having raped a thirteen-year-old. But I didn’t want to make this book about him. After the election, I was happy to see more women express their anger and realize how dangerous our silence is. It was time to harness some of this energy and continue to try to pave a road forward to equality.

After the election, I was happy to see more women express their anger and realize how dangerous our silence is. It was time to harness some of this energy and continue to try to pave a road forward to equality.

Nasty! covers a wide emotional gamut, from really funny ('Fucking Fat') to really harrowing ('The United States of Rape Culture'). The common denominator is a bone-deep sense of honesty. How do you assemble an anthology like this—how do you choose which story goes where? What kind of effect do you want to have on the reader?

Dude, it was hard. I read through A LOT of submissions, and there was so much pain and anger, my heart just kept breaking. But I knew that I wanted this book to inspire people, or to expose them to a perspective they would normally not give a second thought to. I wanted this anthology to inspire people to continue these conversations and seek out more (because my budget only allowed for so many writers).

Once I figured out the ToC, arranging the essays felt a lot like making a mix tape. What would make a welcoming/enticing beginning? What would flow well after? How could I end this on a hopeful note? I tried to group essays by tone and topic that complimented each other, but also had really great spacer essays to give the reader a break from some of the emotionally heavy content. It took a long time to figure out a smooth flow from essay to essay, but I think I did an okay job.

You talk about this in the introduction but, for the folks who haven't picked up their copy (yet): Why donate the proceeds to Planned Parenthood?

Planned Parenthood provides affordable healthcare, sex education, and family planning. If you have little to no means, or don’t have insurance, Planned Parenthood will still see you and provide you with quality treatment. Sounds awesome, right? Unfortunately, a lot of conservative folks don’t like Planned Parenthood because one of the MANY services they provide (like cancer screenings, pap smears, STI testing, etc) is abortion. Because of this, their funding and ability to keep clinics open are constantly under attack. Now, more than ever, they need our help. I’m not sure how well this book will sell, but here at King Shot Press, we’re happy to be donating 100 percent of proceeds to Planned Parenthood. Every little bit helps.

Did any dudes submit to this? If so, was it due to a lack of ability to follow directions, or that whiny 'when will men catch a break' nonsense? How did you handle those submissions?

Yes. Anything that didn’t follow the submissions criteria, I ignored. Some emails were flat out cold and cocky, and the tone suggested that I would be an idiot if I didn’t accept their essay. Some were craftier with their query letter, but the attached essay contained smut, or nude photos, and would be penned by female names that could not be found on the internet. One at least acknowledged that he was a cis-dude, but then followed it up by saying that I could donate to Planned Parenthood on his behalf (with my own money) if I were to accept the story. It was pretty infuriating, but I tried to keep it professional. I sent out a generic rejection letter to anyone who at least followed the submissions guidelines and went through the effort of creating a fake account.

Speaking of dudes, I feel like there's this anxiety among some men who want to help, but don't know how. Or they try, and it comes off as condescending or self-serving. Besides reading and promoting work like Nasty!, how do men help?

Men can help by listening. When a woman tries to tell you something, especially something that makes her feel hurt, ashamed, vulnerable, etc., believe her. If you notice a friend or family member say something hurtful about women, call them out on it—educate them on why their comment sucks. If you’re in a space where there are women, but men are dominating the conversation, invite the women to join in and make space for them to speak (because all too often, we’ll give up on talking if we keep getting interrupted/spoken over as though we’re not there).

What did you learn from this, as a person and as a writer?

As a person, I learned there is so much progress we need to make as a country, and I don’t know if we’ll ever accomplish true equality for everyone... but we should never stop trying.

This project opened my eyes and gave me a newfound respect for editors and publishers everywhere. I feel fortunate that I was able to work with a lot of great people on this anthology, but through the whole process (including seeking submissions), I learned a lot through example of how not to treat people you want to get work with.

Dino Parenti from Los Angeles is reading Everything He Gets His Hands On January 20, 2018 - 9:18am

I really like to read books, especially short novels, I decided to write an essay myself, I thought for a long time, but still decided. I wrote for several months, but never finished, due to the fact that my husband was very ill. And I found a company, there is an essay writing service uk. And they did everything perfectly, I'm so glad because now I have my own essay, plus my husband has recovered.