The Tale Must Be Greater Than The Truth: An Interview with Andrew Hilleman, Author of 'World, Chase Me Down' 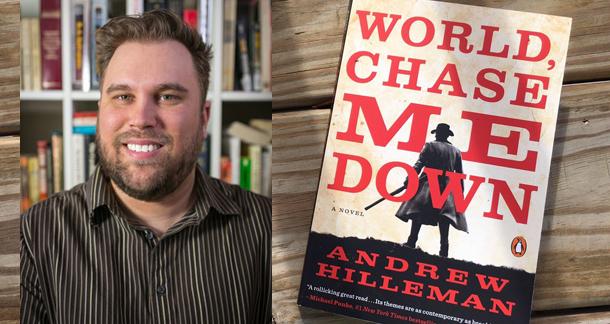 Andrew Hilleman’s Western/Literary/Thriller (we’ll discuss this) World, Chase Me Down was on my radar long before it hit shelves this past January, and I’m happy to say that the novel was anything but a disappointment. Neither was this interview. I pitched Hilleman some curveballs on everything from genre to point of view to pacing to structure and he took them like a literary champ.

World, Chase Me Down is a fictionalized account of the very real Pat Crowe, a folk/anti-hero living at the turn of the twentieth century who kidnaps and ransoms the son of a meatpacking tycoon. Crowe’s story—the chase, the trial, and everything in between—is fascinating for sure, but I’m curious as to what drew you to it. What was so captivating for you about Pat Crowe and his saga? And at what point did you decide that you wanted to be the one to illuminate Crowe for modern readers?

What captivated me the most was the notion of turning a kidnapping story upside down. No matter the medium—be it film, television, literature, or real news—you hardly ever find yourself rooting for the kidnapper. I never have, to be certain. It’s one of the cruelest crimes in existence. Yet, in my research, I immediately fell in love with Pat Crowe. The story itself was an enormous challenge: creating a central character who kidnaps a child and having the audience empathize with the criminal more than his victim or the victim’s family. Pat’s story really had everything: revenge born of desperation and economic inequality, courtroom pyrotechnics, a worldwide manhunt, romantic heartbreak, fierce friendship, gunfights, you name it.

Where it all started for me, though, was the setting: historic Omaha. Being born and raised in the city and a huge fan of its often dark history, I knew I wanted to write about its past. Discovering Pat Crowe, Omaha’s greatest forgotten criminal, was a lightning strike.

I’ve always thought of first person narratives as dicey. If it’s well-written, a first person voice can carry an entire book. But if it isn’t, the whole book can tank. Inauthentic first person style has made me do everything from drop a book to throw it across the room: it’s my biggest turn-off when it comes to reading fiction. That being said, World, Chase Me Down is in the former category and I found Pat Crowe’s voice to be not only sharp and lyrical, but genuine. My question to you, then, is how do you write in the first person style convincingly? How can you keep a character’s voice pure, but still encompass the scope of a story?

The book wasn’t always in first person. It was originally told from an omniscient third-person point of view. I only changed the narration to Pat’s voice long after the first draft was complete. You’re right—first person narratives are very dangerous terrain for writers because they are so hard to execute properly. Not just because of the voice, but also the limited scope. You can only show the story through one set of eyes. That being said, I put a lot of myself into Pat Crowe. His voice, to a large degree, is my own. The only way I was able to interject so much of myself into his character is because I was at a point in my life where his pain keenly resonated with my own.

World, Chase Me Down begins at the end. We meet Pat Crowe as an old man, recounting his tale, and the story jumps around a fair bit from there. What was behind the decision to play around with the chronological structure? Did the historical nature of the story, the fact that there doesn’t need to be a mystery because the story is already true and known, have any influence on how you presented Crowe’s tale to the reader?

The structure, like the point of view, also changed in revision. I had to make massive cuts to a rather large manuscript, and the only way to do that and keep the plot moving forward in every scene was to rearrange the narrative blueprint. The historical nature of the story wasn’t a factor. As a historical novelist, the tale is more important than the truth. I reminded myself of that a lot: This isn’t nonfiction. Tell a good story, damn you, first and foremost. That being said, I stayed true to the three main aspects of the actual history: the kidnapping, the manhunt, and the ensuing criminal trial.

The way you use language to manipulate pacing very much reminded me of Daniel Woodrell or Taylor Brown’s style. How do you keep a hard edge to the story, and keep the reader turning the pages, while still writing in a highly stylized, descriptive and, yes, poetic, way? How do you balance plot and language, two elements that are often at odds with one another, and make it appear effortless?

I’ve never found plot and language to be at odds with each other directly. If you’re doing it right, strong prose creates a stronger plot. In most cases, if a writer relies on tired imagery, stock character development, clichéd metaphor, etc., then that writer also usually has a predictable or slow plot. Here’s the key: plot must come from your characters and your characters must be built through the quality of your prose.

On the other hand, a lot of people can write very pretty sentences. But very few can string all those pretty sentences together into a story that keeps readers riveted. It takes a tremendous amount of practice. If it seems effortless on the finished page, it was anything but to create those pages.

I’ve written one historical fiction novel myself and am in the trenches with another, so I completely understand the importance of research to writing in this genre. What were your go-to sources for accurately crafting the backdrop of World, Chase Me Down? And what is the research process like for you?

My research process was an absolute joy. I never really thought of it as research, but discovery. I was discovering something new about Omaha and the country during this time period almost every single day. In that respect, I fancied myself as a sleuth. I enjoy research almost as much as I enjoy writing. I found a lot of my material in old newspapers. Back then radio was still twenty years away, so everyone relied on the printed press. Not just for news, but for entertainment and advertisements—everything.

The cover of your novel is so striking and clearly sets it in the Western genre, but I found World, Chase Me Down a little hard to peg as far as genre goes (and this is a compliment!). Where would you shelve your book at the local library?

That’s a good question, and a difficult one. I never pitched World, Chase Me Down as a Western. It certainly has Western tropes, but it also bends the genre and hardly ever settles for its more traditional conventions. A large part of the second half of the book also takes place in the courtroom, but I wouldn’t label this novel as a courtroom drama, either. There’s an action-packed manhunt, but it’s not a true thriller. I also put a great deal of energy into crafting prose that would place the novel squarely in the category of Literature with a capital L. I’m not sure where that leaves us. In the end, it will probably be shelved as a Western and I can certainly live with that.

Eileen Joyce Donovan on Writing: “I Can't Imagine Doing Anything Else”