Josh Denslow is Not Special: An Interview 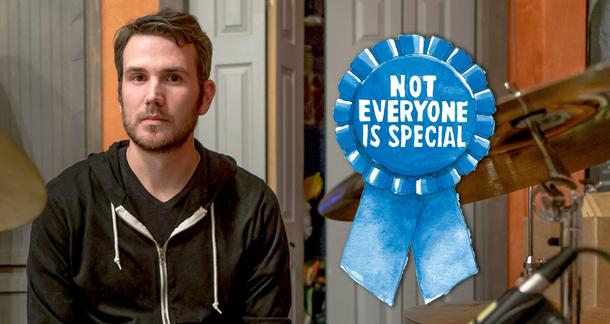 Thanks for allowing me the opportunity to speak with you! Of course, I'm already familiar with your work — I think it was in the deliciously named Pear Noir! that I first remember coming into contact with your words, maybe? I'm excited about your debut collection, Not Everyone Is Special, released by 7.13 Books, but I figured we'd start with this (because I once heard writing is a process by which we understand ourselves and that maxim happens to be hanging on my mind at the moment): What are some of the things, if any, you feel your stories have taught you? And, if I might complicate that further, what is the one thing you feel your stories are STILL teaching you?

Man, I loved Pear Noir! I miss them. Such great minimal design and wonderful stories. Also, that was so long ago. It sure let's everyone know how long we've both been at this. Not Everyone Is Special actually collects stories from as far back as ten years ago. That really blew my mind. Writing feels so immediate that the daily passage of time doesn't seem to line up. If writing had its own Special Theory of Relativity, the fact that I think about my stories all the time, no matter what I'm doing, would be the stand-in for the speed of light. And even if I might only get to put words on the page for a few minutes a day, it feels as if I'm hurtling forward. So the clock slows down as my velocity increases, and stories feel as if they are springing out of me even though I agonize over them for years.

The clock slows down as my velocity increases, and stories feel as if they are springing out of me even though I agonize over them for years.

But does that answer your question? I think it may be the set-up. Since I have that feeling of hurtling forward through space, I was only able to truly see what I'd been subconsciously learning from my stories by going through the process of collecting them for publication. I could see myself leaning into my strengths. Ten years ago, I don't think I was a writer who could even talk about my strengths. But I now think that's an important step in my career. I write a lot of dialogue. I'm good at it. I find humor in places maybe someone else wouldn't. I'm compassionate. That was a nice surprise to find. I'm drawn to characters who have a special talent and then squander it. As the stories progressed over the years, those character talents began to manifest as actual superpowers. Flying, invisibility, teleporting. The title story of the collection is about a guy trying to find his own hidden power in a world where everyone has a superpower unique to them. I think that's what all my writing is about. Searching. And now that's what I think about going forward. My stories are teaching me about what makes us human, and I can do that no matter how many tweaks to reality I make.

Searching is a wonderful word to apply to one's writing! Speaking of that, what enables that search for you? In other words: what's your writing ritual like?

The first thing I search for when I start any new project is the voice of the story. How does that particular story need to be told? I will agonize over the first few paragraphs trying to get the perfect vibration. It's like striking a tuning fork. I need to get those first few paragraphs to match the vibrations in my head. There's nothing scientific about it. I just know it when I have it. I then move forward at a much faster rate, but I can always return to the beginning if I feel myself wavering out of key. Those important first paragraphs remain the tuning fork for everything that comes after.

And I definitely need them! Because the next big search is for the plot. I rarely know what the story is about. I start with a character and maybe an idea or anecdote involving that character, then once I have the voice, I dive in and see what I can discover. I have tried outlining, but inevitably the characters will do something other than I had planned. Then I'm off on a new path, and I wasted my precious writing time on an outline that no longer works. It does help in longer projects to plan what the next couple of scenes might be so I know what I'll be working on the next few days, but I rarely plan ahead further than that. That search for story and plot is a huge part of my process. Though it can make rewriting a real chore!

What do you think about being a writer on social media these days?

That is a loaded question, my friend. I could talk about how Facebook streamlined my process of alienating myself from my family or how Twitter kind of saved me. I don’t want to get political in this interview, but alas, I didn’t let that stop me on Facebook! Now I have all these negative feelings associated with the platform. I let Facebook be too much about me and my views, and so I’m making Twitter a place for me as a writer and artist. I still have tons of opinions, but so do millions of other people. And let’s be honest, my opinions are pretty similar to a lot of those other opinions out there. What I was posting wasn’t adding much to the conversation. In fact, you could find similar posts everywhere. But the things I’m saying in my stories, only I can say. The stories are me.

So after some social media downtime, I started a Twitter account. And I’d recently gotten back into publishing online after a few years away. My flash fiction piece "Dorian Vandercleef" was up at Split Lip and it seemed like the best time to get going. Starting a new social media platform is scary, but little did I know that Split Lip were the masters of Twitter. Suddenly I felt part of a community. I can’t thank them enough. I continued publishing online, and I found strangers were reading my stories. And they were sharing them! And tagging me! It was blowing my mind. And what did I do? I copied them. I set about reading all the online journals that were publishing the kind of writing I liked. I began following all the writers I enjoyed. I began sharing the stories I liked. I reached out to people in messages to tell them how much I admired their work. I was making friends. And suddenly, my social media presence was all about positive things. It was a refreshing change. Twitter strangely made me more invigorated about writing because I’d found this slice of the Internet that was overflowing with kindness and compassion, and most importantly, they were reading and writing.

Suddenly, my social media presence was all about positive things. It was a refreshing change.

The downside of social media is, of course, the urge to check it frequently. The urge to write a post and then wait to see how it does. Endlessly scrolling through the feed. None of those things are very conducive to writing. But for me, interacting with other writers and sharing our successes is more than worth it, and I’m still working on my best ideas for managing it. Like, I don’t post every day. I’m not shy about promoting myself. And having come full circle, I think the best compliment I had was when the editor of Okay Donkey said to me, apropos of nothing, that I was very positive on Twitter. As writers, the best thing we can do for ourselves is to stay positive. I would have never predicted this, but Twitter is keeping me positive.

What piece of advice would you convey to yourself just starting out as a writer (that you feel you didn't really listen to/know then)?

I would walk up to myself, recommend I buy some jeans that actually fit, and then I’d say: “Get involved in the indie lit scene!” It took me way too long to figure out what was going on out there and how I could be a part of it. Think of all the readings I could have attended! All the writers I could have read! All the friends I could have made! When I was starting out, I thought the writing path started in an MFA program. I focused an inordinate amount of time and energy on getting into a fully-funded program and it never happened. I tried for six years. As soon as I began reading for SmokeLong and American Short Fiction and connecting with writers, I just dropped it. I didn’t need an MFA to make me write; I was writing all the time. I thought the MFA would help me make connections. Once I realized I could do that on my own, it seemed considerably less important to continue down that route. So yeah. I’d tell my young self to get involved with the indie scene right away, and maybe, just maybe, I would have never applied to MFA programs at all. That’s a lot of writing time I’d get back!

1. Character - This is where everything starts for me. I sometimes have a rough idea of what's going to happen, but mostly I just come up with characters and then I lock them in a room together and try to keep up.

2. Language - When I'm thinking language here, I'm mostly talking about dialogue, which is maybe not what you meant. I love to hear characters talk and I rarely ever sum it up to keep moving. I want to hear the whole conversation. Which might be a holdover from my screenwriting days, but I don't care. I'm going to keep doing it.

3. Conflict - I think if you have interesting characters, there will be conflict. There is always conflict. Without it, none of my stories would work. But I didn't rank it higher because I find it happens naturally as I'm going about my business.

Wrapping up here, what would you say is art's most important function?

JD: I think art serves two functions: one for society and one for each of us personally. We advance as empathetic humans by consuming art. The quickest way into another person's head is to see what they create. The easiest way to put yourself in someone else's position is to experience it through their art. You can actually shatter your preconceived notions about the world by truly living the art of others.

But when we create art, it's doing something different for each of us. I think at its most basic level, art is keeping us alive.

Matthew Burnside is the author of Postludes (KERNPUNKT) and Rules To Win the Game (Spuyten Duyvil Press).