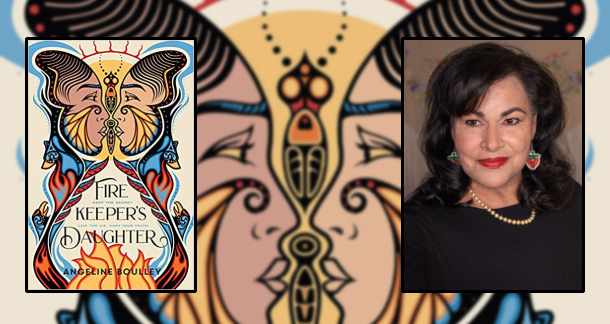 Angeline Boulley is the debut author of Firekeeper’s Daughter, a YA thriller billed as “groundbreaking”, about a teenager named Daunis who gets swept up in an attempt to find and eradicate corruption in her Ojibwe community in Michigan.

Firekeeper’s Daughter is gripping, entertaining and deeply sad in many ways, as Boulley pulls no emotional punches and puts her characters, especially Daunis, through hell to tell her story. It’s powerful and well-written and, truly, explosive.

Boulley is an enrolled member of the Sault Ste. Marie Tribe of Chippewa Indians, and has previously worked as the Director of the Office of Indian Education at the U.S. Department of Education.

I hopped on a call with Boulley to chat about her debut as well as her past working in Indian Education for the U.S. government.

Boulley said that her background in writing comes mostly from grant writing — she worked for Indian tribes and in Indian education, and would write grants seeking funding for whatever tribe she was currently working for, for whatever they needed.

“I used to feel like I wasn’t a real writer or I didn’t have the background that other writers had, but then I really realized that each grant that I wrote, I was telling a story about what that tribal community needed, what the problem was, and what they were going to do to address it,” she said. “I had to tell a compelling story. That changed how I thought about my background as a writer. I had some good training in writing. My background is different from many writers.”

"I used to feel like I wasn’t a real writer or I didn’t have the background that other writers had, but then I really realized that each grant that I wrote, I was telling a story..."

Boulley’s debut is YA, as 18-year-old Daunis has just finished high school and is preparing to dive into college. A personal tragedy (a string of personal tragedies, really) serves as the inciting incident that leads her to work to uncover some corruption within her Tribe. Boulley said that she didn’t really think about the age category for the book while drafting it.

“I wrote the story I wanted to tell, and on revision I thought about audience and market,” she said. “But YA is — a young person looking to find their way in the world. It completely fits YA, even if it’s at the upper edge of YA.”

At the same time, Boulley acknowledged that her book has crossover appeal, and that because it is on the upper edge of the YA market, adults would fall into the story easily as well as teens.

As a writer, Boulley said she is neither plotter nor pantser, indicating that while she starts with an outline, she lets the story take her where it wants to go.

“What I really love is when these ideas or dialogue or character insights would come to me, and they’re very different from where I thought the story was headed,” she said. “I loved the idea that maybe the story was bigger than me and I just needed to be receptive to these ideas.”

While drafting the novel, Boulley was still working at the U.S. Department of Education, and she said she woke up at 5 a.m. to get in a few hours of writing before work. “I loved it when those inspirations would just come to me, and I had to go to work and I felt like I had this secret and I was dying to tell people.”

As a reader of Boulley’s work, that quote really resonated with me because that’s kind of how you feel while reading the book — things happen that you don’t expect, that take your breath away, and you just want to share them with others but that would spoil the secret.

“That’s what I love is when things happened that you never could have planned on, but once you’re open to it and run with it and it fits in the story so well, you have to believe that it’s bigger than you,” Boulley said.

Before getting her two-book deal with MacMillan for Firekeeper’s Daughter and a second novel, Boulley worked full-time at the U.S. Department of Education as the Director of the Office of Indian Education.

As part of that role, Boulley said she did what she could to impact Tribal students on a national level.

“The accomplishments really were being able to talk with program attorneys and upper-level administration about things happening in tribal communities,” she said. “They would have an idea about something, and I could say — this is what you need to consider about Indian country, this is what our Native students are going through.”

The real joy in that job, she said, was having “administrators and policy wonks” sometimes go so far as to change their ways of thinking about things they were planning to implement as a result of her work and advocacy.

She shared an example of a time someone had proposed an idea predicated on the assumption that students would have Internet.

Boulley was able to point out that, in the Navajo nation, 25 percent of students don’t have electricity, much less Internet.

“That’s something where I felt like I'm in the right place at the right time, I'm the best person to be at the Department of Education right now and share this information and have an impact on what the federal government does,” Boulley said.

When it came to transitioning from working in government on behalf of Indian education to writing a story featuring a Native character, there were a few things that Boulley did very intentionally. One of these was her inclusion of Ojibwe words and sayings, as well as traditions.

“The Ojibwe language needed to be very organic in the story, and I really wanted to write it so that people could figure it out through context,” she said, adding that she specifically did not want to include a glossary because that would almost make it too easy for non-Native readers, saying that it would center them and their experience.

“In terms of craft, that was deliberate in terms of writing it in first person present tense — so many stories that do feature a Native character that kids read are stories that were written a long time ago,” Boulley added. “I wanted to reinforce that we are here, this is happening. Even though the story is set in 2004, centering it in the here and now.”

Boulley’s debut releases Mar. 16, 2021 from Holt Books for Young Readers. The book can be pre-ordered from several retailers and a preorder giveaway for character prints is underway.

Get Firekeeper's Daughter at Bookshop or Amazon