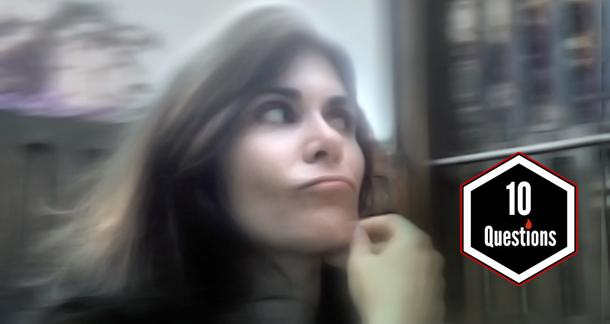 In his introduction to A Child's Life and Other Stories, R. Crumb describes Phoebe Gloeckner as looking at the world with penetrating intensity, and I can't imagine a better description. Her major works, A Child's Life and Other Stories and The Diary of a Teenage Girl, capture excruciating and pivotal adolescent moments through the filter of Gloeckner's stunning comic illustrations. Her stories are heart-wrenching and compelling.

Recently, Gloeckner has focused her attention on the thousands of women and girls who have been kidnapped and killed in the border city of Ciudad Juárez. Her work uses handmade dolls and constructed sets, animation, and digital photography to tell the stories of girls who were murdered. She is planning to release both a printed and multimedia publication on the project, which is supported by a Guggenheim Fellowship. I caught up with Gloeckner as she was presenting portions of this project in Los Angeles.

What was the first story (or comic) you ever wrote, and what happened to it?

It's something I dug up a while ago when I was writing The Diary of a Teenage Girl, and it's in there. It's about walking around San Francisco.

The first story I got published...I guess I did it when I was 16 or 17, and someone wanted to publish it in a comic book called Young Lust. They asked me to reconfigure it into four pages rather than five, and that was a new idea for me (because I had never worked with any publication). I cut it up and put it together again - the equivalent of editing a written piece, I guess, like trying to get it under a certain number of words. The complication is the words are inextricably linked to all of the images, so that was kind of a trick! I celebrated by feeling stunned with joy and not knowing what to do next.

Can you tell us about your process?

I don't think you can tell an artist how to be an artist. If an artist is going to be a good artist, they're going to have to find their own way, or they're not going to be original.

I'll share what I know of it. I tend to live my process. It takes me a long time to do things primarily because I need to let them become a part of me. I don't believe I'm an autobiographical artist or writer, but I think that my work requires me to become, in a sense, all the characters. That confounds the line between autobiography and fiction, but it's a part of my process.

For this Mexico thing, I went to Mexico a long time ago, about eight years ago, and I was asked to go there by someone from Amnesty International to do a story on murder victims — women who had been murdered. So I flew down there and met the families of a lot of teenage girls who had been killed, and I could have just taken that information and done a story, like a reporter, but I'm not a reporter. I couldn't do that — I had to feel it; I had to have that experience. I was writing about very poor people. As a privileged white woman from Michigan working in academia, on the surface I had very little in common with the people I was writing about. My first response, because I had never been to Mexico before, was this incredible guilt — why me? Why am I in this position and not that one? I was shocked by the poverty, and I was shocked by the pain. It was something I didn't want to see because I had teenage daughters myself and it made me more vulnerable when I listened to these mothers cry about their loss — it was horrible. But I felt like it was necessary for me to tell the story, and it was necessary to normalize it in my mind. I couldn't tell the story as a privileged white person from a different country. So I kept returning again and again and somehow insinuating myself into their lives and it was difficult, but I couldn't stay away. I was trying to be a part of it somehow, even tangentially.

I'm constantly recording and writing impressions and responding to whatever I'm seeing. When I was in Mexico, I was doing this story, which is based in fact, so I was interviewing people, reading police records, taking pictures, making drawings. That was a big part of the process. A lot of it is essentially research. I started this project by drawing it, like a regular comic, but it was overwhelming to me. I'm a medical illustrator, that's what I was trained to do, and when I first went to Juarez, I was drawing a book about the joys of sex toys. I came back with all these police papers, and the way this one girl had been murdered was they took a splintered 2x4 and stuck it up her ass, and she bled very slowly to death in the middle of the desert. I had this in my head, and then I went home and the specific thing I had to draw was rectal plugs. And I kept getting these two things confused in my head and I stopped drawing for a month. I thought: I'm going to start making dolls. Then, if I have to kill them, or if I have to rape them (because I become the characters, even the bad ones), if I have to do this to this doll, the next day I can just clean her off and make her live again. That was the solution that made me happy.

I teach myself everything. I don't know how to ask questions of other people who might be able to help me, and I've always learned everything on my own. I never studied writing. I never really even studied art; I was pre-med and doing biomedical communications and then medical illustration, which is not exactly what I do with comics. Most of what you've seen are things that I've learned by just loving comics and art and writing, but not because I studied them at all. I'm an autodidact and I have this position at a university and I'm telling my students: "Go out and learn something by yourself and then come back and show me," because that's what I did! I tend to do things that I haven't done before, and it feels like I'm constantly pushing myself, and at some point, it seems fucking impossible. It really does. And I just think, "If I'm supposed to finish this, something is going to show me what to do." I don't believe in God, so I'm thinking the ghost of Janice Joplin — anything! It often seems like I've taken on too much, and somehow it resolves. I always feel like there must be an easier way and I'm not a person who's ever found it. I'd be a lot more prolific if I did.

My latest printed work was this book called I Live Here, which I did for Amnesty International. It was a compilation of lots of peoples' work. The catharsis was I realized what these three-dimensional things would look like in print. I also realized that you have a lot less control over what things will look like when you're printing colored objects, like colored photographs. It's different than black and white comics - there's a lot more room for unhappiness. I have catharses everyday, and setbacks too. I'm begging for a catharsis.

I'm thinking about my favorite books, and I don't know if I'd like to sit down and have a drink with these people. In Dostoyevsky, I really love the guy from Notes From Underground. I forget his name, but he's probably a total ass with mental problems, and he might not be that sociable.

I used to buy them in bookstores, but they've all closed. It's true! The first Borders was in Ann Arbor, and they closed less than a year ago. The only bookstores left, downtown, are a used bookstore and a comic book store. Now I buy books on Amazon.

I've been lucky because of the reviews that have been written, they've been largely positive, so that kind of buffers me from the negative ones. They hurt! But you know not everyone's going to like you so they're not going to like your work. I don't know. There's no easy way to deal with that, and I hope anyone reading this never gets a bad review.

It's hard to give advice nowadays. It's not that it's bad or good advice. I don't think you can tell an artist how to be an artist. If an artist is going to be a good artist, they're going to have to find their own way, or they're not going to be original. It's always true that you should try to meet the people you admire. I've done that in the past and it's always benefited me because you kind of just bask in... them! It gives you an idea of what you might become if you set your mind to it.

Having examined your childhood and teenage years in your comics, do you have any plans to continue the autobiography (or semi-autobiography) in the future?

I think I have to. This is the problem: I think the most reviled character in our culture is the older woman, especially a single older woman. I mean, how fucking pitiful. It's horrifying in a sense for people to look at older women — they don't want to. So somehow I'm going to channel that because I think it's important. I had to give Minnie a voice [in The Diary of a Teenage Girl] because she wasn't being listened to, and I've got to give this other person a voice as well. There's a whole set of assumptions that may not always be explicit, but they're there. I think about this a lot. It's almost too horrifying to think about yourself — you can't face it. The only way I could face my own biography was to think of her as any girl. It becomes a schizophrenic process. At the point where I'm able to do that with myself as a person who's older, then I'll be liberated and able to represent her.