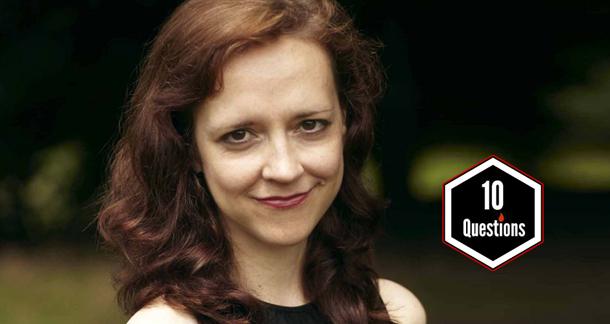 I'll be blunt: Megan Abbott is my favorite novelist.

Over the past decade, Ms. Abbott has produced some of the most innovative crime novels being written, from historical noirs such as her debut, Die A Little, to her chilling account of the Phoenix, AZ Trunk Murders in Bury Me Deep, to pulp infused hardboiled outings such as The Song is You and Queenpin. But it's with her three latest novels—The End of Everything, Dare Me, and The Fever—that Abbott has truly flexed her storytelling muscles; redefining such classic noir tropes as the femme fatale and contemporizing it.

With her latest release, The Fever, Abbott has taken the idea of a mystery illness inflicting a small group of high school girls and the mass hysteria that engulfs their small dreary town. The Fever is easily Abbott's most ambitious and complex work to date, and is, of course, one of my favorite reads of 2014 so far.

I can’t even quite remember, but I recall a distinct ripoff—let’s call it “homage”—of Little Women written in third or fourth grade. Maybe it was called Tiny Sisters. There was a lot more scarlet fever in my version. And I know I wrote a lot of detective and spy stories that may have been cribbed substantially from The Great Brain and Encyclopedia Brown.

A gimlet at Bemelman’s Bar at the Carlyle Hotel in Manhattan.

I start early, at the computer, and then write on and off the whole day in strange jags and starts. With many breaks. The goal is to not talk or see anyone because I’m surly and mean and vaguely menacing until I’m done. Then, at four o’clock, I have a beer and become a person again.

Oh boy. Part of me wants to say there are no mistakes in writing. Because it’s such an iterative process and it all matters. It is, as the cliché goes, about the journey. That said, I’d never use the names of real people again. Because you can get sued.

Hands down, Philip Marlowe, Raymond Chandler’s detective hero. I love those books so much, his voice so fervently, I feel like I know him. In fact, I drank that gimlet at Bemelmans because it’s Marlowe’s drink in The Long Goodbye. And every time I walk into a bar, I think of Marlowe telling us:

I like bars just after they open for the evening. When the air inside is still cool and clean and everything is shiny and the barkeep is giving himself that last look in the mirror to see if his tie is straight and his hair is smooth. I like the neat bottles on the bar back and the lovely shining glasses and the anticipation. I like to watch the man mix the first one of the evening and put it down on a crisp mat and put the little folded napkin beside it. I like to taste it slowly. The first quiet drink of the evening in a quiet bar—that's wonderful.

Part of me wants to say there are no mistakes in writing. Because it’s such an iterative process and it all matters. It is, as the cliché goes, about the journey.

I don’t think I ever do get there. This one, The Fever, came fast.  It almost felt like I was chasing the story to keep up. When I was done, I couldn’t figure out where any of it came from. It gave me nightmares. Finishing it felt more like a self-exorcism.

So many places. Locally, Mysterious Bookshop, Book Court, WORD and the Strand in NYC. Last year while I was living down south, Square Books in Oxford, Miss. And when I’m on the road, Murder by the Book in Houston, BookPeople in Austin, Aunt Agatha’s in Ann Arbor. I buy books wherever I see books.

I’m a coward. I don’t read reviews. I stopped after my first book. They would get in my head, good or bad. So I try to wear blinders, ear muffs. It isn’t easy in the age of social media, though. When one is presented to me, I have mastered the art of the unfocused eye.

“Write what you know.” That just makes no sense to me, it’s always been write what you don’t know…and want to know more about.

Your past three novels have focused largely on teenage girls, what frightens you the most about this age demographic and do you plan on using teenagers in future novels?

I can’t say that age frightens me, but I do think it’s among the most challenging, fraught, complicated times in our lives. We’re trying to figure everything out and it’s a treacherous process. To be a teenager is to be disillusioned daily, but to wake up the next day and still yearn for more of life. Great drama for books. And yes, my next book includes a teenage girl, but it’s about an entirely family (as The Fever is). And family can be frightening!

loved this. big fan of Megan's. i need to get THE FEVER for sure.

I've got Dare Me lined up as a summer read - I've been saving it for myself as a treat.

Wondering if you lived 'Down South' for a while for research purposes.