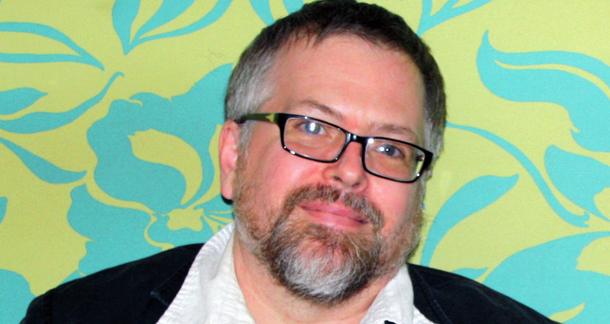 Like so many new-to-me authors over the past seven years, I was introduced to the novels of Jeff VanderMeer by longtime friend and editor, Brian Lindenmuth. In 2009, Lindenmuth wrote me letting me know that he'd just mailed me two books, with a note saying I had to read both ASAP. The books were Brian Evenson's short story collection, Fugue States and Finch By VanderMeer. I cracked Finch first. The novel was a weird amalgam of Chandler, Kafka, and Gibson, but in the same breath, completely unlike any of the aforementioned writers. It was just ... weird, but a compulsively readable weirdness that made me search out and devour VanderMeer's other novels.

Fast-forward to 2014. VanderMeer has gone on to become one of the preeminent editor/anthologists (along with legendary super -editor and -wife, Ann) of science fiction and fantasy, as well as a publisher with Cheeky Frawg, which publishes VanderMeer's shorter works as well as excellent translations of internationally renowned fantasists such as Karin Tidbeck (if you haven't read Jagannath By Tidbeck yet, do yourself a favor and pick that up as soon as possible) and Amal El-Mohtar. But as far as new novels are concerned, VanderMeer had been relatively quiet, at least until the publication of the Southern Reach Trilogy.

The first book in the trilogy, Annihilation, was creepy, claustrophobic, and possessed all the VanderMeeresque tropes which originally caused me to bolt to the bookstore and buy up his entire back catalog, and currently ranks as one of my top 5 reads of 2014 so far. So needless to say, I'm chomping at the bit to dive into the second book of the trilogy, Authority (which just so happens to hit bookstore shelves today).

VanderMeer has been extremely busy touring in support of the trilogy, but luckily he gave LitReactor a few minutes of his time. I hope you enjoy.

It was a retelling of a fable about antelope when I was eight years old. I retold a lot of fables and folktales early on. It’s in a little journal I kept at the time along with a lot of my poetry from back then, including the classic “Oh How I Love the Sea.”

I don’t recall celebrating, really. I’d had material in my middle school and high school literary magazines, but those didn’t count—like riding a bike with training wheels. The first thing I sold in the real world was at age 13, I think, and I remember it was poetry. I had sent out 99 poems to 99 literary journals, and they’d all come back with form rejections just a few months before, and I’d sent out another wave, and then, suddenly, at some of the lower-level places I started to have success. But those weren’t my goal, so I didn’t celebrate, really, although I was happy to be in them.

I started selling fiction when I was about 15, and I do remember being more happy with that, in part because I already thought I would be better at fiction than poetry. I sold a lot of fiction to small press and mid-level publications in my teens, along with The Silver Web, run by Ann Kennedy, who would eventually become my wife and is now known as the Hugo Award-winning editor Ann VanderMeer, and then I think I was about 18 or 19 when I broke into Asimov’s SF Magazine, which I most definitely did celebrate. But the whole time I was running a publishing company, too, which makes you more jaded about publication in general. Publication, to me, was a trap of thinking that you were good when in fact you were just good enough to get published, which is a lower threshold.

Publication, to me, was a trap of thinking that you were good when in fact you were just good enough to get published, which is a lower threshold.

I write longhand usually, then type that up, print it out, edit it with a black pen, and then rewrite that in longhand, type it up—and repeat. Usually by the third draft I stick to the Word docs, but sometimes I’ll render down parts of it into longhand again. The main reason for that is if I follow that process I will actually rewrite rather than just make some minor changes here and there. Longhand also allows me to enter the fictive dream while writing a lot easier, and to see the text anew in revision. Writing isn’t supposed to be about efficiency, but about getting to the right place.

I’d like to look at that question from a different perspective. I’ve probably made every mistake you can, and that’s been invaluable. Making mistakes is so important to growth as a writer and understanding the arc of your career, and what you want out of your writing and your life. My sole advantage here is that I started out so early, knew so early that I wanted to be a writer, and then have had a career that has been a steady upward rise through micro and small presses to bigger indies to large commercial and literary publishing houses. So several of my worst mistakes have occurred while I was also learning my craft, well before they could hurt me. But I still make mistakes. You never stop. You just get craftier and you get better at detecting bullshit.

Also, my point of view is to take risk with book projects, whether my fiction or nonfiction/coffee table books. When you decide that you’re basically going to say “yes” to every cool opportunity even if you’re totally out of your depth, then you’re going to make mistakes, and the biggest mistake is to let those mistakes throw you or haunt you. The past is never going to come back, so make the best of what’s ahead of you.

I never know how to answer that question. Really, I don’t want to have a drink with any fictional characters. There are enough interesting real people. Besides, since characters in any book are still just words on a page, like the landscape around them; they don’t have the proper digestive tract to imbibe any liquids. No doubt, you’d have to hold the glass up to their faces, and the stuff would just dribble out the back of their mouth-holes to the floor.

It’s usually the same catharsis: of getting to live in the heads of characters you care about and love even when they do stupid or bad things, and seeing your way to the end of the story, of seeing how things fit into place and how they will never fit into place. (This may contradict, in important and irreconcilable ways, my mouth-hole answer to the prior question.)

I am nondenominational and rove the world buying my books from anyone who will sell them to me.

I used to respond to certain kinds of negative reviews or positive reviews that seemed to have missed the point because I felt there was a larger point to be made about accuracy, especially in cases where I felt I was punching up, not punching down. But I haven’t been that way for a long while. The whole atmosphere has changed since 2009 when my last novel was out, and readers are more possessive about the works they read. There’s more of a sense that once it’s out there the author is dead and buried. And it’s fairly useless to argue with that. I do appreciate that people are passionate about their reading, although I wish sometimes they’d also be kinder—just looking at reviews in general. Yet people have been very kind to Annihilation, so I personally have no complaints. Still, I do point out factual errors sometimes. You can have your own interpretation but not your own facts, and not everything in a text is subjective.

There’s no single piece of worst advice out there, just like there are no two stories with flaws for which the fixes are exactly the same. But I do observe writers giving out bad advice for one of two reasons. The first is that they haven’t updated their career software in thirty years so you get advice like “put your story in an envelope with an S.A.S.E. and send it to Pony Express Quarterly. You’ll hear back in six months about your pony story—and if they reject it you can send it off to Long Ago Folded Magazine.” I call this the Inadvertent Bullshit Advice. It also applies to writers who, for example, exist in such rarefied air that they’ve lost any perspective on what occurs on the street level. The second is the writer who creates facts out of thin air based on their own situation. Their YA novel tanked so suddenly “YA novels are commercial suicide,” when in fact it’s just that their novel Gargantua and Pantagruel: The Untold Story from the Viewpoint of a Passing Snail, tanked. Nothing is worse than advice from a novelist who has just gotten bad news. O the ache of my beating heart, allied to the sad, sad rain falling from the horrible sky.

great job, this was awesome. big fan of Jeff's.

Fantastic interview--makes me love him even more.