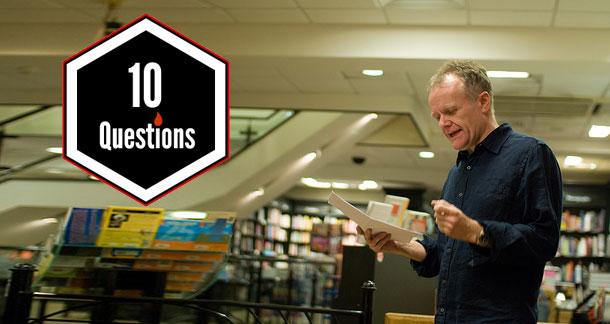 Just a few weeks ago, we brought you the belated news that science fiction author Jeff Noon had written his first new novel in a decade. This was almost a year after I had asked the question, What The Hell Ever Happened To... Jeff Noon?, and got the then hoped-for answer: Working on a new book. No time frame was given, but with the way publishing works, I figured it might be a while.

So I settled in to wait. Unfortunately, I was less than vigilant, and the book's release flew under my radar. I'm still a little annoyed with myself, but at least it's finally here. It's called Channel SK1N, and is about a pop star named Nola Blue who "begins to pick up TV signals on her skin."

Noon decided to go the self-pub route with this one, and you can purchase the novel as an eBook in a number of file formats HERE. (You can also get the short story collection Pixel Juice, which I highly recommend.)

And even though I missed the release date, Noon was kind enough to submit to our battery of questions, for which he offered these lovely answers in return.

I can remember at school being put in the bottom stream for English. We had some kind of test on the first day, and because of my results on that I was moved up to the next stream. There were five levels altogether, so I was still far down the pile. But a younger teacher took this new class, with a more modern attitude than the old-style guys I was used to. The very first thing she did was to ask each of us to write a story. I guess I’d be about eleven at the time. So I wrote a science fiction story. I can’t remember the plot, but I do remember stealing the last two lines verbatim from Arthur C. Clarke’s novel of 2001: A Space Odyssey, which I’d just finished reading. So there it is, my confession.

If I get a really bad review and it’s by somebody who has genuinely tried to engage with the work, then, after a suitable amount of time has passed, I will try to face the criticism, and indeed, act upon it.

Anyway, the teacher loved the story and asked me to read it out loud to the class. But as I approached the front, I noticed the bookshelf behind her, and a copy of 2001 on it. She actually owned a copy of the book. Gulp! But I just carried on and read the story, and everything seemed to go very quiet in the classroom as I did so. So I guess that was the first time I realised that my words could have an effect on people. Whether the teacher had actually read 2001: A Space Odyssey or not, I don’t know. But she said nothing about my early version of sampling. And I wrote a good number of gory, fantastical, surreal stories under her tutelage. It’s so important, getting the right teacher at the right time.

Well, before I sold anything for money I started sending stories off to alternative fiction magazines, a bit like fanzines for writing. This was in the late 1970s, during the Punk era. There was no payment involved, but it was brilliant to see the work in print, and usually accompanied by a cut-and-paste illustration of some kind. I then started my own punk fanzine that featured my writing, amongst other things. It was just photocopied sheets of paper stuck together with staples, that I sold at gigs. But, I suppose my first proper success was for a play called Woundings, that I entered for a big playwriting competition organised by the Royal Exchange Theatre in Manchester. The play won a prize and was later put on at the theatre. I received a very nice amount for that, probably £1000 or something, which was a whole lot of money back then. This would be the mid 1980s. I probably celebrated by getting outrageously drunk, something that I had a real talent for, back in the day.

I write on screen, on an old laptop. I am the opposite of an early adopter, basically keeping devices until they break. And by break, I mean break forever; otherwise I will patch things up with sticky tape and glue and whatever else is lying around. I listen to music constantly as I write, and years ago I realised that music sounded best around 9pm in the evening. For me, it’s a fact. So I thought, maybe that’s the best time to write as well? So I tend to do all the serious writing work at night, going to bed around 3 or 4 am. I am a nocturnal creature. I write by remixing and sampling and lots of other homemade techniques that I use to create a batch of images. I then select these images and start to manipulate them until a story starts to emerge. It’s like conducting an experiment with language. So I never sit down and open a blank doc and type...

Chapter One. Harry stormed into the room, shouting, “How dare you, sir!”

...or anything like that. I never begin at the beginning. The process is very non-linear, even though the eventual outcome is often a linear story. I let stories form like ghosts slowly arriving into this world.

Not to use a pseudonym. I’ve always loved masks.

Oh, it was interesting. I didn’t exactly intend giving up on writing novels after Falling Out of Cars, but that’s what happened, as I fell in love with the idea of being a screenwriter. But after ten years of endless rewrites and nothing on screen to show for it, and not having an audience for all that time, I had a bit of a Road to Damascus moment on the London to Brighton train. The next day I started to create a website, metamorphiction, in order to post stories and essays and so on, and I dug out the first draft of Channel SK1N and had a look at it. It was actually called Telemorphosis, to begin with. I’d had the idea of somebody picking up TV signals on their skin a few years back and managed a rough draft, but once again the film work took over. But now I read through what I’d done, decided it was worth another shot, and set to writing a novel once again. I was incredibly nervous about it. But the words just flowed out. I couldn’t stop writing. When it was finished we sent it off to a number of publishers. It was accepted by one, but then I started to wonder about the whole self-publishing eBook thing, which had just started to really be talked out. And the more I thought about it, the more appealing it seemed. So, I decided to go independent. Pan are publishing eBooks of Vurt and Pollen, but I’ll be doing the rest of the backlist and any new books myself. It’s a great feeling.

Well, I haven’t drank alcohol in many a year now, but I’d quite happily share a coffee or two with Deckard from the Blade Runner film. I’d ask him, “You’re totally human aren’t you, and not in any way a replicant?” And he’d answer, “Of course, fully human. Flesh and blood, all the way.” ;-) Also, Sherlock Holmes would be fun, if a little scary and intimidating.

Amazon, mainly. But Foyle’s on Charing Cross Road is my all time favourite bookshop. It still has the old values, and it’s obviously staff-run, rather than operated from central management. I could browse in there for hours, no problem. It has a brilliant poetry section, which is always my first port of call in any bookshop.

With difficulty. And then a shrug. But if I get a really bad review and it’s by somebody who has genuinely tried to engage with the work, then, after a suitable amount of time has passed, I will try to face the criticism, and indeed, act upon it. There was a very bad review I got some years ago that made me reconsider my approach to writing, I think to the better. So, they can be useful.

Wild Card: You've always been very forward thinking and willing to experiment in your writing. How do you see the changing landscape of technology and the publishing industry affecting your work in the future?

There will always be new platforms invented, and writers will explore those, and new ways of writing will grow out that process. But of course hardly any of this will touch the mainstream literary world, which continues on the whole with 19th Century styles of writing.

But the thing I’d like most of all is a word processor modeled on music making software, because musicians are given so much choice, so many buttons to press! They can randomise, remix, turn melodies upside down, reverse them, add reverb, echo, etc. I’d love to be able to do equivalent things to text. At the moment, it’s all still at the level of scissors and glue, when it comes to manipulating words.

Regarding the self-publishing phenomenon: we will see new subject matters, new narrative forms, new ways of distribution, new kinds of editing. I believe that writers will learn how to edit their own books much more effectively. We’ll see highly individual works appearing, as people use the technology to truly express themselves, away from the constraints of the big publishers. These works will lock into specialised audience groups. It will operate pretty much how music does, at the moment. Some will make a living from it, a few will become multimillionaires, some will sell 12 copies, but they’ll have done it themselves, and I think they’ll feel proud of what they have achieved. There are very interesting times ahead. And science fiction, as always, by its very nature, will be at the forefront of the wave.